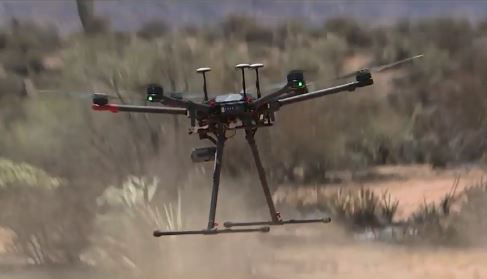 As firefighting efforts continue, crews are using new technology to help fight the fire. Video of helicopters and even a jumbo DC-10 fighting this fire with water drops have been seen many times, but there’s also a mini flying machine making a major difference by being another set of eyes from the skies.

The M-600 unmanned aircraft system has helped to take on the Woodbury Fire in Phoenix, Arizona. It takes a two-person crew, a pilot and watchman. The unmanned aircraft soars up to 8,000 feet, with a three-mile radius for up 40 minutes per flight.

It’s equipped with two cameras, which includes an infrared lens that can detect ground heat to see hotspots before they light up. It not only surveys the landscape, but it can drop little ping-pong-like balls filled with a chemical accelerant to set off back burns. They begin to spin a few seconds after hitting the ground, and a tiny flame starts to shoot out, hopefully igniting a back burn fire.

Mostly, however, the M-600 is made to go where no man or woman should have to go, like the steep slopes of the superstitions, where the Woodbury Fire made its mark.