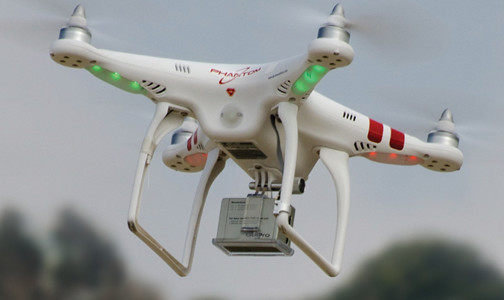 Right out of the box, this advanced machine will let you master your airspace

In the last two years, quadcopters have become one of the most popular flying RC models. Now there are contests starting to appear around the country just for quad competition. What this means for the modeler is that there are more and more quadcopters on the market, making it easy for us to get into multi-prop aircraft. One of the easiest new quads to fly comes from DJI and is called the Phantom Quad RTF.

This bird is so advanced that it comes out of the box ready to fly and even if you’ve never had your hands on the sticks of a helicopter or quadcopter before, you won’t have any problem flying this one. The first thing I noticed when I opened the box was how futuristic the Phantom looks. It has an attractive and sleek look to it. The aircraft’s main body, including the motors, ESC, and flight computers, is completely assembled. Just the props and landing gear need to be assembled. A white matching transmitter is included in the box and requires four AA batteries that the builder needs to provide. Under each of the arms of the Phantom are LED lights that are used for orientation during flight along with some red bands on the two forward arms. Because all of the hardware mounting and software tuning is done at the factory, the Phantom is ready for flight from the moment you unpack the box, making this the perfect quad for the newbie entering the multi-rotor world.

The battery compartment is completely concealed, giving the Phantom a clean overall look.

This machine comes in a nicely thought-out box that protects the Phantom very well during shipping. I found that the arms, motors, ESC, and all of the electronics are mounted inside the fuselage and ready to go. All I needed to do was to mount the landing gear, camera mount, and props to get this bird in the air. I started the process by plugging in the included DB20-4 balancing charger and connecting the battery up to it. I figured the charging of the battery would be the one point in the assembly process that would delay me from putting this bird in the air. So, I wanted to get started on that charging process before everything else.

Modes and What They Mean

The Phantom has a nice, stable hover, and green and red LED lights (green on the back two arms, red on the front two) help with orientation while in the sky.

The transmitter that comes with the Phantom has a three-position switch at the top of each side. The right side puts the Phantom in ATTI (attitude mode) or GPS mode. In attitude mode (ATTI), the NAZA system will stabilize the aircraft but when you let go of the stick, the Phantom will keep level but it will maintain the momentum in the direction it was flying. In GPS mode, when you let go of the sticks, the Phantom will stop itself and use GPS satellites to maintain its position in space and will wait for your next response. This is very beneficial for the new pilot just learning how to fly a quadcopter.

One of the powerful motors that gives the Phantom an unbelievable vertical climb.

The compass that is used in conjunction with the GPS system is located at the bottom of one of the landing gears.

The camera mount is then bolted into the front bottom of the fuselage. This mount is a perfect fit for the older style GoPro cameras as long as they don’t have a case on them. Now, all that is left is the mounting of the propellers, which is easy to do. The props come in packs of two with one prop that spins clockwise and one that spins counter clockwise. Each prop has a symbol molded into it that indicates which way it needs to spin; I just matched them up with the same symbol on the end of the arm near the motor. A prop wrench, which is included with the Phantom, is used to tighten down the nut to lock on the prop to the motor.

Once the battery pack is done charging, I was ready to fly. The pack fits in a compartment inside the fuselage and this keep the outside of the Phantom clean and streamlined. From the time I took the Phantom out of the box until it was ready to fly was only about a half an hour. I had to wait another twenty-five minutes for the battery to finish charging, and then it was off to the flying field.

Here is the Phantom in action, photographing the plane in a hover just in front of it.

The first thing I would recommend is to go online to dji-innovations.com and check out the five how-to videos on the Phantom. They include assembly, pre-flight checklist, first flight, advance flight modes, and IOC (intelligent orientation control). Then, download the NAZA-M assistant software. This will give you everything you need to prepare yourself for your first flight. My first flight was on a calm day with an experienced helicopter pilot next to me. Both sticks on the transmitter have to be held in the lower corners for a little bit and then the Phantom will start up. After all four props start spinning, raise the throttle stick a couple of clicks to keep the motors running. I throttled up and the Phantom broke ground and started climbing. Once in the air, I found it really easy to keep the quad where I wanted it. After a short five-minute flight, I was ready to land it. I backed it into the landing spot to keep all the controls oriented to my position. Right before touchdown, I throttled up slightly and then let the Phantom lightly touch down. My helicopter pilot never had to touch the control during the flight because this quad was that easy to fly.

I would recommend flying in GPS mode so if you get into any type of trouble, all you would need to do is let go of the sticks and the Phantom will stay in position motion, giving you some time to plan your next move. As you can see, I would easily recommend this bird to anyone looking to get into multi-rotor aircraft. It is very solid and easy to fly.

The Phantom is an excellent introductory into the world of multi-rotor copters. It is very simple to put together and easy to follow the instruction videos available online (dji-innovation.com). It has intelligent orientation control and it can fly itself home if you get in trouble. There really is no downside to this quadcopter, and I would recommend it to anyone who is interested in exploring the world of multi-rotor aircraft.