Here is a great story from Air & Space Magazine (July 2015) By mark Betancourt.

Sentinels in the sky are hunting the poachers. 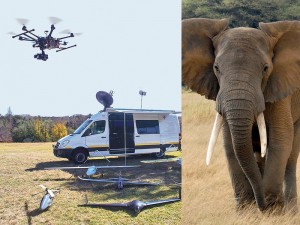 Air Shepherd uses a variety of virtually silent drones in African wildlife parks to catch poachers before they can act. (UAV and Drone Solutions/Courtesy Air Shepherd)

Biologists predict that within 10 years, rhinos and elephants could be extinct in the African wild because of poaching. Wildlife rangers patrolling millions of acres of land are mostly helpless to stop the massacre; poachers kill in the dark of night, remove the parts they want, and disappear, all within minutes.

But a new system could put an end to poaching. An organization called Air Shepherd has teamed up with data researchers at the University of Maryland with plans to lay a blanket of smart air surveillance over Africa’s most vulnerable wildlife parks. Small, battery-powered UAVs are much more mobile than park rangers and virtually silent, making them ideal for spotting poachers who think they’re alone in the bush. But while a drone can find poachers anywhere, that’s helpful only if rangers have already been positioned nearby to stop them.

Tom Snitch, a professor at the university’s Institute for Advanced Computer Studies, spent several years working with the U.S. military in Iraq to reduce casualties from roadside bombs. His team used satellite imagery and a computer algorithm to model where bombs were likely to be placed, then used drone surveillance to find and track the bombers themselves. In Africa, Snitch’s new algorithm factors in the movements of animals within a park, the locations of water holes, the daily weather, even the distribution of rhinos’ favorite cactus snack, then adds the locations of recent poachings; the result is a flight pattern for the drone.

To read more click on this link:  Air & Space Magazine