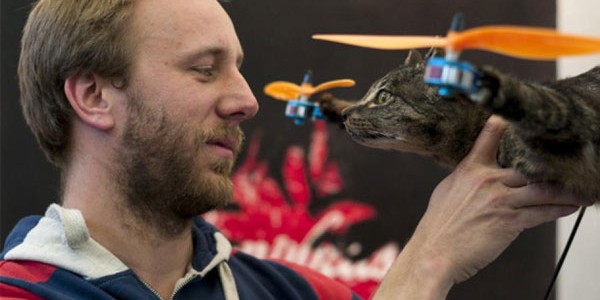 While this is one of the most original modifications to a quadcopter we’ve seen, it certainly pushes the boundary between humorous and incensitive. Take a look at this article from www.nydailynews.com and let us know what you think in the comments below.

Dutch artist turns dead cat into remote-controlled helicopter, dubbed ‘Orvillecopter’
‘Half cat, half machine’ made into art project after pet was hit by car”

Cats may get nine lives, but not quite like this.

A Dutch artist, upset over losing his beloved pet, Orville, had the animal stuffed and transformed its body into a remote-controlled helicopter, Sky News reported Monday.

The “half cat, half machine” piece of art was dubbed the “Orvillecopter.” The cat, who was killed when it was hit by a car, was named after famed American aviator Orville Wright.

“After a period of mourning, he received his propellers posthumously,” Jansen said. 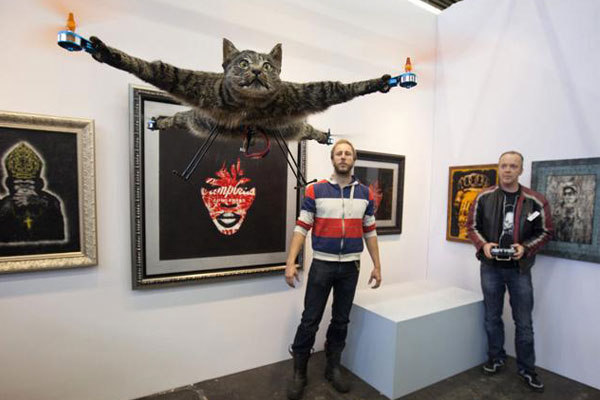 Above: The ‘Orvillecopter’ by Dutch artist Bart Jansen (l.), which he create with the help of Arjen Beltman, flies in a gallery as part of the KunstRAI art festival in Amsterdam.

A video posted to YouTube shows the flying feline slowly hover several feet in the air in a park, its body permanently spread eagle with propellers on its front paws. 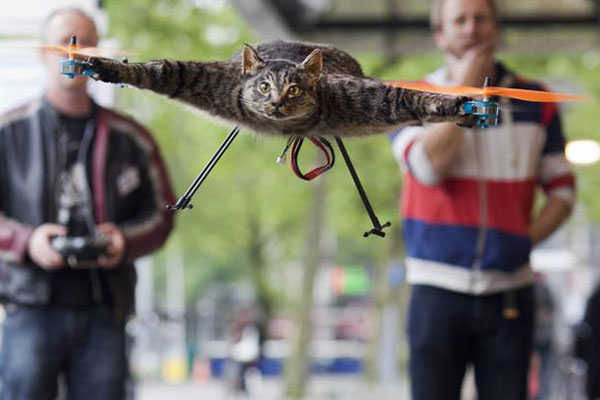 Above: Jansen built the Orvillecopter together with radio control helicopter flyer Arjen Beltman, seen in this photo operating the ‘half cat, half machine.’

The bizarre creation was then unveiled at the Kunstrai art festival in Amsterdam on Saturday.

The Orvillecopter doesn’t fly quite right, however, a glitch Jansen hopes to fix.

“He will receive more powerful engines and larger props for his birthday,” Jansen said, adding that he hoped the upgrades will allow for a more “steady flight.”