Drones are taking life-saving in Scotland to pioneering new heights. For the newly-formed Search and Rescue Aerial Association Scotland (SARAA-Scotland) is to use the remote-controlled craft to save people who are lost, missing or injured.

It is thought to be one of the most significant developments in mountain rescue since search dogs were introduced in the 1960s. The Association – which became a charity in July and is based in the Borders – will use the drones to find people in the most inaccessible places.

To do that the Association’s volunteers will undergo special training to fly the drones by York-based Flyby Technology (https://www.flybydronetraining.co.uk) which only has instructors who are ex-military or are civilian aviation instructors. They are led by former RAF fighter pilot and instructor Jon Parker and run courses nationwide including in Edinburgh and Aberdeen.

In 2017 and into 2018 Scottish Mountain Rescue carried out a feasibility study to look at how drones – which are also known as Small Unmanned Aircraft or SUAs for short – could help in search and rescue operations.

There was a clear need for them and SARAA-Scotland now has one drone that is operational and hopes to have another five in action by early next year.

A top quality drone would cost £30,000 including a thermal camera and the latest high technology zoom camera – but at the moment SARAA-Scotland is aiming to get more of the middle-cost drones to cover as much of the country as they can and the one they are using now was bought for £3,500.

The team will usually have to take their drones to inaccessible places which would mean carrying them quite long distances on foot over difficult terrain.

The team’s aim is to eventually provide cover for most of Scotland and SARAA-Scotland has been formerly recognised by Police Scotland because their high quality training by Flyby Technology shows them to be safe and competent when it comes to flying drones.

SARAA-Scotland’s trained operator is Tom Nash who served 15 years in the RAF as a Tornado navigator operating thermal cameras, targeting systems and weapons.

“Flyby Technology’s aviation knowledge is second to none,” he said. “Drone regulations are changing on a regular basis and Flyby will ensure we are trained to the very latest rules and regulations and that’s vital support for an organisation like ours which is a charity run by volunteers.”

SARAA-Scotland, which is affiliated to Scottish Mountain Rescue, has now put in grant applications in a bid to buy more drones but it is always on the lookout for businesses or individuals to sponsor them.

Its chairman, Dave Wright, said: “We will be recruiting people to fly the drones who are already mountain rescue team members – people with a search and rescue background who can look after themselves out there.

“It’s now a case of getting the funds to buy the kit we need, distribute it and train the members and at the start of next year it’s hoped we will have six pilots being trained by Flyby.”

Tom, who has done 270 drone flights together lasting 45 hours, has already used a drone in a search for a vulnerable missing person in the Borders area of Scotland and discovered just how vital they will be in the future – not just searching but also enhancing the safety of search and rescue team members.

He said: “During the Borders search I was tasked to cover 3km along a river – which is a huge area. One side was a steep banking which was a high risk area for searchers on the ground but the drone could get a good look right along it. The terrain would have been very difficult to search on foot.

“We could then say with confidence we knew the missing person wasn’t there so the ground searchers could be deployed elsewhere more effectively.

“Regulations mean we can only fly the drone to a maximum of 500 metres from the SUA pilot and we need to keep it in sight at all times but we carried out that search in 67 minutes which was far quicker than it would have taken on the ground.

“The drones will show us where missing people aren’t as well as where they are. For instance, if someone was lying down in a field of barley it’s likely only a drone would spot them and it can check areas where we could not get to on foot or even with a search dog.”

Tom added: “The drone will also improve health and safety for search and rescue team members.

“If there is a rescue down a cliff face, for example, we can fly a drone along the cliff to get a good look at the best place for the team to go down – where there are the best crevices, lines down and footholds and also spot anything that was a potential danger. The only other option would be to peer over the edge to try to work out the best route down but what you’d see would be very limited.

“And we would only need a small drone for this – something that could even fit into the top of a rucksack.”

Members of SARAA-Scotland are learning all the time and the feasibility study which concluded this summer gave them plenty to think about.

Dave said: “This is pretty cutting edge stuff. How do you effectively use a drone flying over open moorland differently than if you were searching a river? We are still finding out and doing more training and test flights so the pilots will have the knowledge of the experience we are now building up.”

For more information on Flyby Technology go to https://www.flybydronetraining.co.uk/

For more on Search and Rescue Aerial Association Scotland go to https://en-gb.facebook.com/SARAAScotland/ 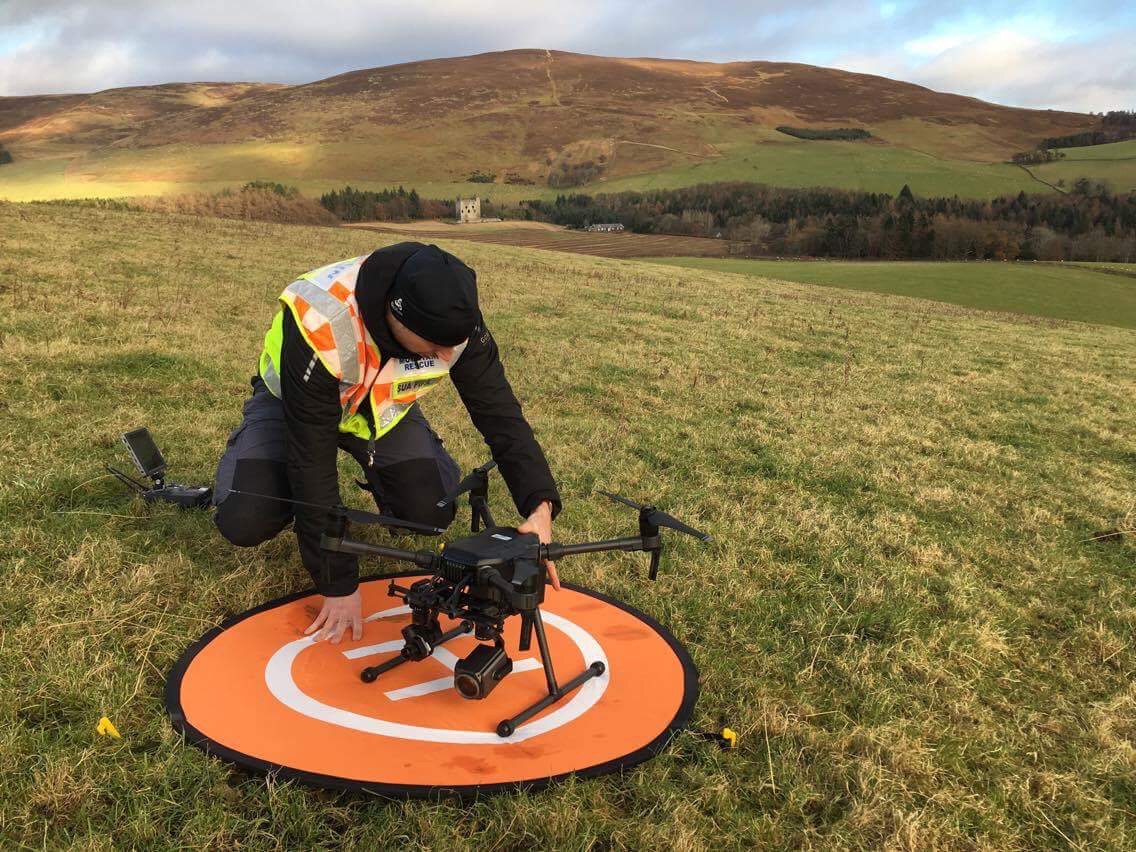