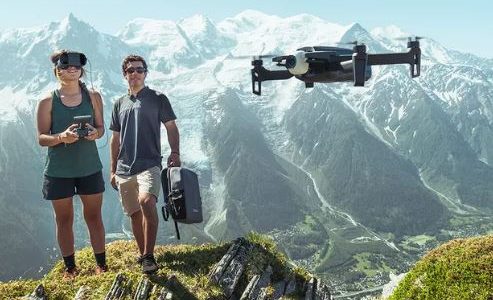 Parrot’s popular Anafi drone is now available with built-in FPV capability! Here are the details from Parrot: Anafi FPV is designed for explorers but also for dreamers. The camera experience is a new paradigm for aerial photographers and videographers, providing a unique “cocoon” for immersive photography and in-depth image controls. The full array of Anafi’s manual camera settings are available in FPV mode – full sensations guaranteed.

Photographers can enjoy total immersion in the on-screen image, exploring new techniques for shot composition – then seamlessly toggle into deep image controls to fine-tune photos and videos. Manual settings such as shutter speed, ISO, white balance, and exposure compensation – and advanced features such as an image histogram and “zebra” exposure assistance overlay – are customizable and easily displayed by opening the settings using the button on the Cockpit glasses.

Two new flight presets join ANAFI’s exciting menu of options, designed to help pilots of every level capture stunning videos with ease. Available in FreeFlight 6.6, the new additions allow ANAFI FPV pilots to expand their creativity at the tap of a touchscreen.

With the Cinematic preset, you can capture smooth and dramatic footage that looks like you’re behind the controls of a glider. The horizontal axis of the 4K HDR camera is locked to the tilt of the drone, and footage shows every majestic bank and turn in your flight.

While the Cinematic preset is built for stable and fluid motion, the Racing preset will get your adrenaline pumping! The horizontal axis is also locked to the tilt of your drone, but this preset is built for speed instead of smoothness: Your videos will have a more-aggressive look as ANAFI bobs and weaves through the air at high speed.

Along with the launch of ANAFI FPV, FreeFlight 6.6 will also introduce two new revolutionary flight modes. Both are designed for simple and intuitive flight controls – and they can be used in combination with the flight presets to make jaw-dropping footage even easier to capture!