Where celebration, education, and inspiration converge

The New York City Drone Film Festival (NYCDFF) is now in its fourth year, and with each passing event, it cements itself further as a premier showcase of not only drone technology and technique but also the degree to which drone-based camera platforms are becoming a part of mainstream filmmaking. Fully half the winners in this year’s lineup are professionally produced films made not specifically to showcase drones or even the artistry of the filmmakers (although there is certainly plenty of that!). These films were made for a purpose, and drones provided the most effective way to capture the shots needed to fulfill that purpose. That is a significant sign of the maturation of drone cinematography, both as an art form and as a commercial entity. While we are thrilled to see that happen, this event was ultimately about the beauty, creativity, and entertainment value of the films themselves. 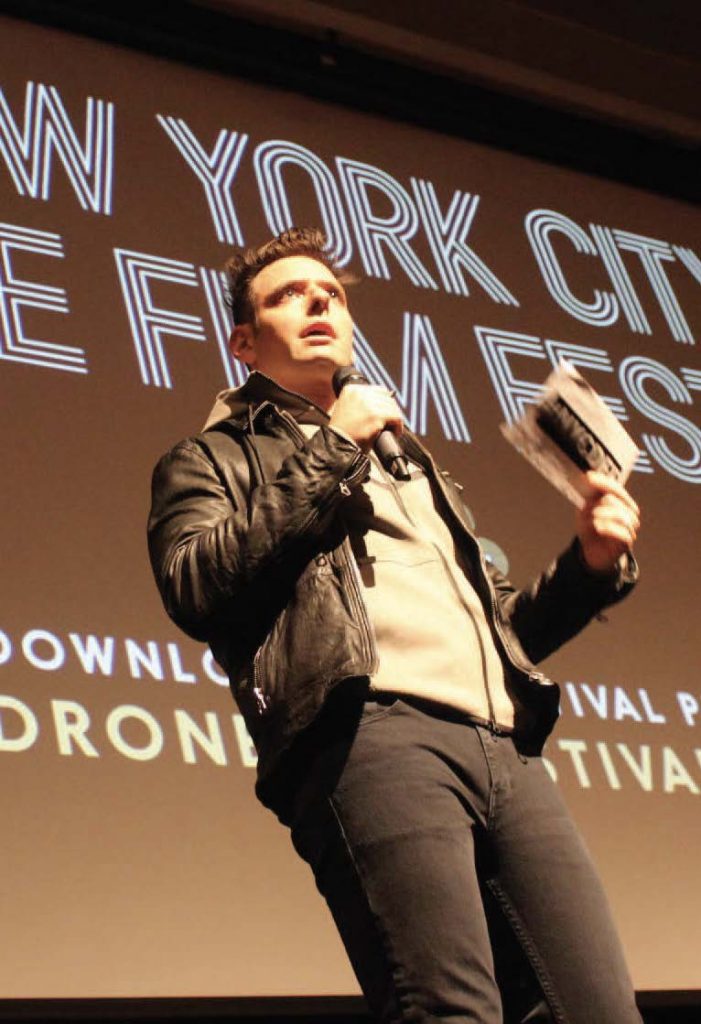 Creator and festival director Randy Scott Slavin served as emcee for the awards show.  From the beginning, his vision has been to celebrate drone filmmaking while also  making the New York City Drone Film Festival a nexus for public outreach and positive promotion for the art form. 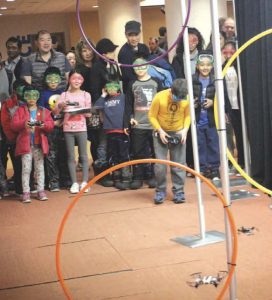 While much of the attention surrounding the NYCDFF focuses (rightly so) on the winners, just as important to the future of the art and the industry are the event’s efforts at community outreach, engagement, and education. Festival director Randy Scott Slavin has always had his eye on the big picture when it comes to drone film, and he recognizes that the future depends on engaging the public and inspiring the next generation of pilots and filmmakers. The award ceremony took place on Saturday evening, after a day of screenings and panel discussions held at the BMCC Tribeca Performing Arts Center in Manhattan. The “Day of Drones” was held the following day at the Liberty Science Center, just across the river in Jersey City. That event combined numerous educational seminars and demonstrations designed to inspire and inform the next generation. The Beginner Drone Pilot School put newbies on the sticks for the first time, with coaching from the pros. Freestyle FPV and micro racing competitions showed off the skills of the best stick jockeys, while the Drone Expo and Flight Demonstration Cage let the public see all kinds of drones up close and in the air. A full schedule of educational sessions that taught numerous aspects of flying, filming, editing, and commercial drone applications for all skill levels filled out an eventful day of programming. 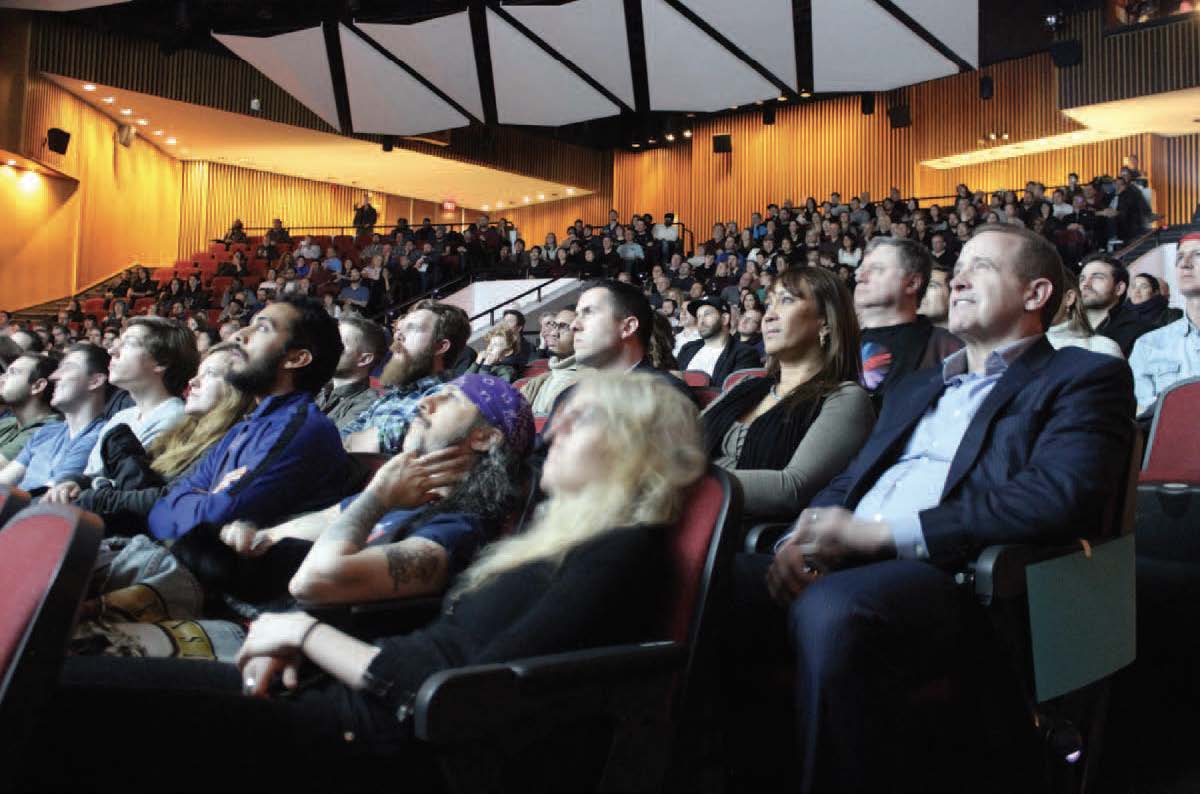 The 2018 NYCDFF awards ceremony once again played to a packed house, filled with  filmmakers and enthusiasts at the BMCC Tribeca Performing Arts Center in Manhattan.

“EXTREME SPORTS ” & “BEST IN SHOW”
Quattro 2 (Ski the World)—by Candide Thovex It might seem strange that what is nominally a video promoting a car company (Audi and its Quattro series) could win the “Extreme Sports” category—until you see it, that is. During the 4 1/2-minute video, extreme skier Candide Thovex exploits his extraordinary talent and creativity to ski seemingly every conceivable surface but snow on and among some of th 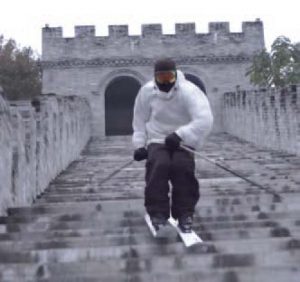 e most striking natural scenery and man-made structures on Earth. You’ll find yourself questioning whether some of it could possibly be real, but there the Frenchman is, skiing the stairs on the Great Wall of China, on a slope of ash of an active volcano, down sand dunes the height of skyscrapers, through jungles, in between an army of stone soldiers in Mongolia, and on cresting waves on the beaches of an island paradise. Audi’s budget and Thovex’s skills combine to yield production quality that puts this video in a class by itself, netting not only the “Extreme Sports” win but also the coveted “Best in Show” award.

“DRONIE”
The Last Dronie—by Chris Castor
A “dronie” is the term coined for a selfie taken with a drone. In video format, this is accomplished with a single continuous shot, which includes the pilot. This year’s winner eschews the style of previous entries in this category, which tended to feature arresting visuals but little context. Instead, The Last Dronie plays off of the ever-popular zombie-apocalypse theme, panning back from the pilot and a small group fighting for their lives
to view the larger city aflame and overrun by shuffling hordes of the undead. It’s a clever take on a well-trodden pop-culture theme, and clever use of CGI augmentation to turn the mundane cityscape into an apocalyptic one gives this dronie an entertaining narrative element. 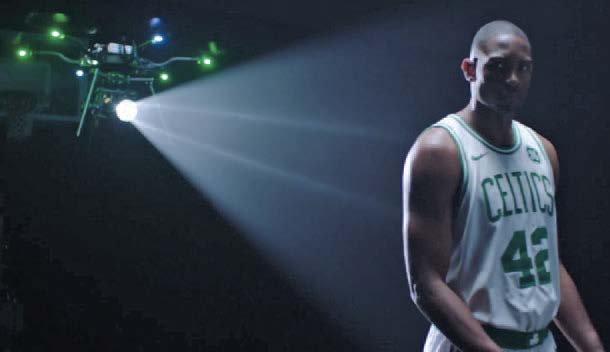 “FEATURING DRONES”
Boston Rising (Boston Celtics Open 2017)—by Colin Burgess
The category “Featuring Drones” is one of the only ones where drones take their place in front of the camera instead of carrying it. As such, the cinematography in this video for the Boston Celtics home opener in 2017 is fairly conventional fare for the type of hype reels they play on the jumbotrons at home games for many pro sports franchises, with lots of hero shots of the starting players. But along with the starting five, there are other stars: a cadre of DJI Inspire drones decked out in LEDs so that they—quite literally—fly the Celtic colors too. It works visually and to convey an impression of futuristic potential to match the team’s young lineup.

“NARRATIVE”
Donny the Drone—by Mackenzie Sheppard
Despite its rather innocuous name, Donny the Drone delivers a weighty and complex message in its 11 1/2 minutes. It sets up with the premise of a drone being selected “Person of the Year,” and the film recounts Donny’s journey of self-awareness and self-determination. Structurally, the film is a mix of drone-to-drone flight shots mixed with conventional shots of Donny himself. A-list actor Guy Pearce gives him voice as Donny extols his personal philosophy of altruism, help, and respect for all in monologue form. Were it merely that, the film would have been good (if somewhat preachy in places), but Donny’s speech gradually takes on authoritarian undertones, which evoke current events and lead up to a dramatic twist at the end (which we will leave you to discover
for yourself!). Suffice it to say, it adds layers that make this film more difficult to define, and even more interesting for it.

“FREESTYLE FPV”
Muscle-Up—by Robert McIntosh
Robert McIntosh’s aerial tours of Venice Beach have impressed audiences and judges in previous years, and this year, he adds elements like the famed Muscle Beach Gym featured on TV and in movies—including the original Pumping Iron documentary that made Arnold Schwarzenegger a star and to which this video pays tribute with an audio sample as the drone sweeps over the site. It then weaves through and around various
obstacles in a single continuous shot. Two elements help the video stand out. It is filmed at dawn, yielding a magical quality to the light and leaving the usually crowded beach nearly deserted. And the footage is played backward in the final cut, giving the viewer the sensation of looking back over the scene as the drone flies away.

Muscle-Up from Robert McIntosh on Vimeo.