Once you receive your daylight waiver from the FAA, no doubt you will be anxious to exercise your hard-won privilege. Night-time aerial photography is a great way to begin your exploration into darkness while capturing some dramatic images that you can add to your portfolio. From a photographer’s perspective, the key difference between day and night is the absence of light.

At the surface, this seems like an observation so obvious as to not be worthy of mention. However, it has critical implications for the art of photography, which must be considered before you can begin capturing quality night-time images.

Visible-light cameras possess a sensor that captures the light reflected and emitted from objects in the environment to create an image, in a manner not dissimilar to the retina in the human eye. However, when light is scarce, not enough of it falls on the sensor to create a clear picture. The result is an underexposed photograph, which is murky and dark.

Since the earliest days of photography, which involved exposing light-sensitive silver halide crystals suspended in a gelatin emulsion and applied to a strip of celluloid—otherwise known as “film”—there have been three basic solutions to this problem: add more light; increase the sensor’s sensitivity; or, extend the duration that the sensor is exposed to the light.

None of these is a perfect solution, but which one you choose will have a profound impact on the aesthetic style and quality of your final photograph.

When you want to take a selfie in a darkened room, your cell phone will automatically power up a small LED light or turn the display white and adjust its brightness to full, so that there is enough light for the camera to capture a clear image. This is the same reason professional photographers use photo strobes—commonly referred to as “flashes”—while taking pictures indoors: for the split second that the camera’s shutter is open, the flash floods the space with light, resulting in a photograph that is properly exposed.

As drone pilots, we tend to focus on features that are typically quite large: anything from a city block to an entire city. The sheer scale of these subjects essentially precludes the use of our own, artificial lighting to cast more photons on the sensor. If you happen to have ready access to 10 fully equipped grip trucks with a combined output of 100,000 watts from studio-grade lighting equipment and an electrical source potent enough to power them all simultaneously, go for it! I’m sure you will get some spectacular results.

However, the rest of us will have to rely on whatever light is available in the environment as we find it. So, we tend to stick with the other two options. 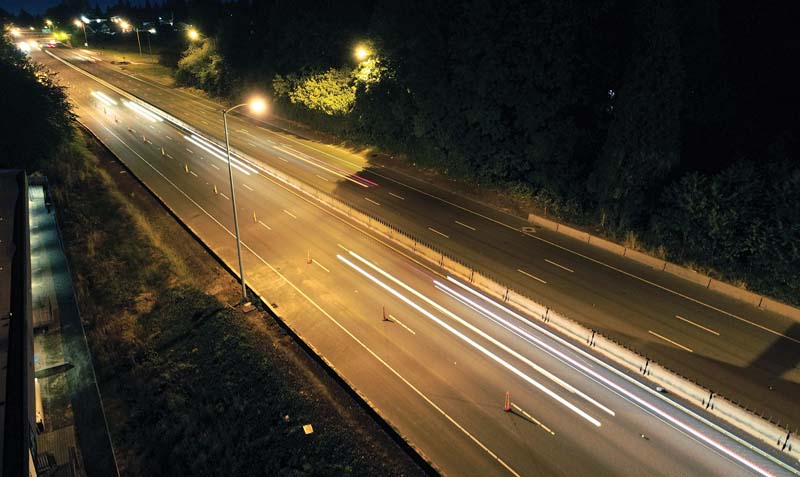 Long-exposure photography allows for the creation of clean, clear photographs even in dark locations. In this example, traffic speeds along a highway at midnight. Notice that the cars themselves are invisible and the only evidence of their passing is the illuminated streaks left by their headlights. The lengths of the streaks represent the distance the cars traveled while the camera’s sensor was exposed to the scene. 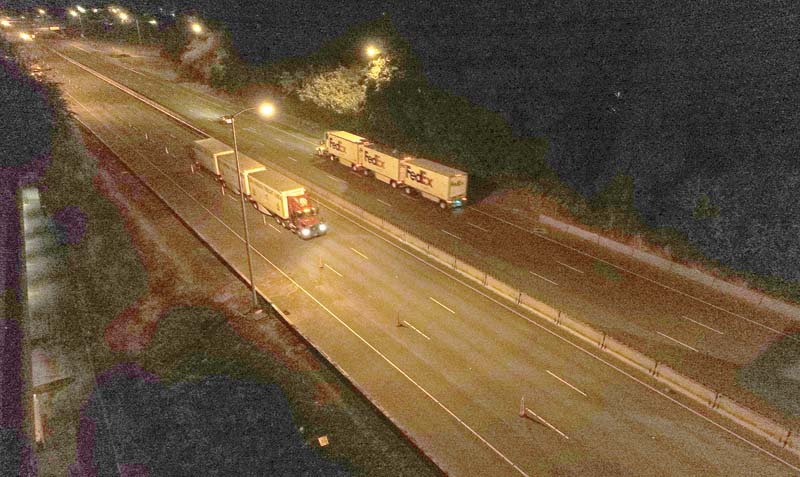 Even at night, modern digital cameras with high ISO settings are able to capture images that freeze the motion of objects in the scene. In this example, notice that it is possible to read the logos on the sides of the passing trucks. However, using extreme sensitivity settings results in an extremely grainy image—perhaps better suited for public safety applications than vivid aerial imagery. 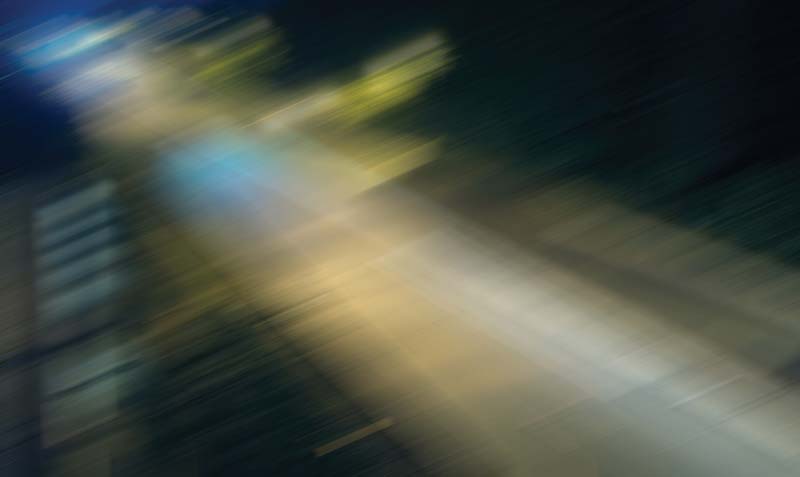 During a long exposure photograph, a moving object in the camera’s field of view will be blurry or disappear entirely. However, if the camera itself moves, then the entire image is blurred—resulting in an unusable photograph. A high degree of stability is required to deliver successful night photography using drones.

When photographers used film to make their images, its sensitivity to light was measured using ISO numbers—which generally ranged between 100 and 3200. The lower the ISO number, the smaller the silver halide crystals on the film, and the less sensitive it was to light. ISO 100 film, for example, could typically only be used in full daylight or a controlled studio setting with an abundance of artificial lighting.

The benefit to using film with a low ISO number was that the smaller silver halide crystals created an exceptionally clean image, without visible film grain. As ISO numbers increased, so did the size—and sensitivity—of the crystals. A photographer shooting ISO 3200 film could expect to get reasonable results shooting at night on a well-lit street. However, the film grain in the finished photograph would be obvious, even to an untrained viewer.

While film cameras are a distant memory for all but a handful of specialist photographers now, these same basic principles still apply. Indeed, many hand-held digital cameras and the camera gimbals on drones still use ISO numbers to define the sensitivity settings of their sensors. Furthermore, the fundamental trade-off between sensitivity and visible grain remains the same: make your sensor more sensitive, and you can expect to get grainy images.

Now, grain isn’t necessarily a bad thing. If you’re working in law enforcement, for example, it’s far more important to be able to clearly see your subject than it is for the finished photo to be aesthetically pleasing. Also, grainy images can help establish a mood, which is useful in certain applications—like every Hollywood techno-thriller produced over the past two decades. Most digital editing software includes the option to deliberate add grain to your images, to achieve this effect.
However, if you want a clear image without grain and without artificial light, you only have one option available to you.

If you don’t want to crank up the sensitivity and trucking in enough search lights to direct anti-aircraft fire over London during the Blitz isn’t an option, you can allow more light to fall on the sensor by extending the period of time it is exposed to the existing light in the environment.

Using long exposure times has been a secret weapon in the hands of photographers shooting at night for decades. When you take an ordinary photograph in daylight with your cell phone, a digital camera or your drone, the sensor is typically exposed to the light for 1/60 of a second—at most. That interval can easily be as short as 1/1000 of a second, or even less. Unless you are Stephen Hawking describing the events that immediately followed the Big Bang, these are inconsequentially short periods of time.

These intervals are referred to as your “shutter setting:” another throwback to the era of film photography, when a mechanical shutter was used to control how long the silver halide crystals were exposed to the light.

Now, instead of taking a photo in daylight with a shutter setting of 1/1000, imagine it is night time and you leave the shutter open for one whole second—what would happen? Photons from lit objects in the camera’s field of view would “stack up” on the sensor, creating a clear image, even though they would be invisible at a faster shutter speed.

What if something moves while the shutter is open? It would appear blurry, or even disappear altogether, because there would not be enough light reflected from its surface at any one location to register. What if the camera moves while the shutter is open? If that happens, everything in the frame appears blurry as it is “dragged” across the sensor during the exposure.

Therefore, even the slightest movement of the camera is the mortal enemy of long-exposure photography, which is why photographers use tripods and remote shutter releases to capture these types of images. Of course, being mounted on an aircraft, movement defines your camera.

Taking successful long-exposure photos with a drone means ensuring the camera gimbal is free from vibrations caused by the motors, maintaining exceptional position hold and finding times and places to fly where wind will not be a factor.

Like the process of applying for a daylight waiver, successful night aerial photography requires knowledge, patience and maybe even a little bit of trial-and-error before it is accomplished successfully. However, once it is accomplished, no one can argue with the quality of the results.