During the early morning hours of February 8, 2019, violence disturbed the otherwise peaceful city of Campbell, California. Just before 5 a.m. an armed suspect barricaded himself in a Denny’s restaurant after threatening others with a firearm. Within a few minutes, the Campbell Police Department and SWAT team had surrounded the building. It was the beginning of what would become a 12-hour standoff.

At the request of the Campbell Police Department, a local drone company was called in to assist. With their US-1 drone, Impossible Aerospace was able to provide a regular scan of the perimeter. The battery-powered drone’s remarkable flight time of well over an hour allowed for continuous video footage of the situation. The video aided in planning and executing a peaceful resolution to the standoff.

As part of a program called Rapid Response, Impossible Aerospace offers free air support to government agencies within a 60-mile radius of their Santa Clara headquarters. The program is already proving to be a success. The Campbell Police Department considered the footage provided by the Impossible US-1 to be more consistent than the feed from the county’s helicopter. The situational awareness provided by the drone helped end a potentially deadly situation without harm to anyone.
In another example of its success as a part of the Rapid Response program, the company responded to a construction site fire on June 28, 2019. The four-alarm fire was located just a few minutes from their office. The drone was able to provide firefighters with a thermal video feed and identified hotspots for the fire crews to focus their efforts on. As a testament to the aircraft’s endurance, it remained on station for 1 hour and 6 minutes at which time the fire was finally extinguished. 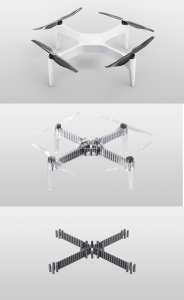 Instead of a battery pack, the cells in the US-1 are integrated into its structure. This allows more batteries to be used for longer flight times.

STARTING WITH THE BATTERY
Impossible Aerospace is the brainchild of founder and CEO Spencer Gore. A few years ago, Spencer was a battery engineer at Tesla. While designing batteries for Elon Musk, Spencer thought more and more about the possibility of battery-powered aircraft.

For years the aerospace industry has viewed the possibility of battery-powered long-distance flight as, dare I say it, impossible. Batteries offer some significant advantages over fuel, like lower emissions, more efficient motors, and less noise pollution. Disadvantages include higher takeoff weight, lower energy in batteries vs. jet fuel (by some estimates, 1 kg of jet fuel has about 70 times the power of 1kg of lithium-ion batteries), and unlike fuel that burns off, batteries are mostly dead weight once their energy dissipates.

Spencer and his team of several dozen people (about a third of whom are former Tesla engineers; another third are former SpaceX engineers) believe it is the future. Taking a page from Tesla, Spencer wondered what the possibilities would be if the design of the aircraft began with the battery first.

With this in mind, the team designed the Impossible US-1. Starting with lithium-ion batteries, the team looked to build the highest performance aircraft on the market with electric power. Spencer says he and the team are proud the drone is 100% designed, engineered, and assembled in the US.

With a current national climate focused on security issues, many government entities are shying away from drones produced outside the US. In May 2018, the Department of Defense suspended the purchase and use of all commercial drones citing cybersecurity concerns. The National Park Service only allows search and rescue teams to use two drones made by US companies, one of which ceased manufacturing drones several years ago. Impossible Aerospace believes they provide one of the best products on the market while eliminating the risk of data leaks to potentially hostile nations.

THE DRONE
The Impossible US-1 weighs 15.7 pounds and is 26×26 inches. The aircraft can operate in winds gusts up to 30mph and works within a temperature range of 32 to 122 degrees F. The fuselage is a simple but elegant X configuration almost entirely filled with batteries. The landing gear is retractable and is designed to help absorb energy in the unlikely event the drone crashes.

Most impressive of all is the hovering flight time of 1 hour 18 minutes and a cruising flight time of 1 hour and 30 minutes. It only takes 45 minutes to fully charge the aircraft, so if an operator has two Impossible US-1 drones they could, in theory, always have a drone in flight. Imagine covering a fire, armed standoff, or natural disaster recovery operation without ever having to stop collecting data. Thanks to Impossible Aerospace, these scenarios are now a reality.

As a company, Impossible Aerospace focuses on the commercial market. They believe their drone is ideally suited tp law enforcement and other first responders. It is a market segment with great potential: there are around 18,000 police agencies and over 29,000 fire departments in the US alone. According to Spencer, less than 70 of these can afford the use of a helicopter. A drone like the Impossible US-1 can provide many of these organizations with an aerial platform to aid in a wide range of situations.

Interestingly, the Impossible US-1 is more of a proof of concept than a final product for the company. While their current product meets the demands of what many customers are asking for, the vision is to eventually be a part of producing large scale electric commercial aircraft for passengers and cargo. It is a dream shared by others; the company’s backing comes from some of the most prominent venture capital firms around. Bessemer Venture Partners, Eclipse Ventures, and Airbus Ventures invested $9.4 million in Impossible Aerospace in September 2018. Other investments for these firms include companies such as; Linkedin, Shopify, Wix, and more. With Airbus’s venture capital arm onboard as well the dream of electric commercial aircraft may be a reality sooner than we think.

The Impossible US-1 is already in production, and orders are ready to be taken. The thermal package drone and base station provide the user with everything they need to begin aerial operations.

Spencer and his team at Impossible Aerospace have developed an incredible platform. The ability to remain in the air for over an hour opens the door to new and exciting possibilities in the UAV community. With the Impossible US-1 as a successful proof of concept, we may see a flight in the next few years on an electric airliner as opposed to the fuel-guzzling giants we currently fly in. The company is another example of the exciting things the future of our industry holds. Making the impossible possible seems to be the hallmark of this company.—By David Daly