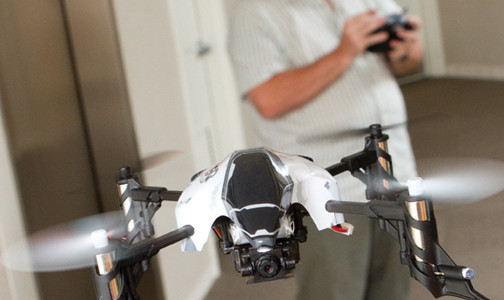 The 1SQ V-Cam is ideal for inter-office aerial video ops! It’s stable yet maneuverable and can easily fly through doorways and land on desktops. Smile, you’re on candid camera!

Let’s face it, quadcopters are taking our hobby by storm and they continue to evolve when it comes to the ease of flight. A very popular quadcopter from Heli-Max, the 1SQ, has already proved itself as a great performer, and up until now, you couldn’t ask for more. Just when we thought the 1SQ couldn’t get any better, Heli-Max debuted the 1SQ V-Cam, which comes out of the box with an adjustable-angle, micro digital video camera. Sporting its new gray and white pseudo-military pixel camo scheme, you won’t confuse it with its orange and white predecessor. The 1SQ V-Cam comes in two versions: ready to fly (RTF), which includes its own 2.4GHz transmitter, and transmitter ready (Tx-R), where you can use your own transmitter hooked up with a Tactic AnyLink module.

The 1SQ V-Cam fits in the palm of your hand, but it’s not a handful to fly. Its built-in flight stabilization system allows almost anyone to fly it.

With its TAGS-FX Sensor Fusion stabilization system working on all three axes (yaw, roll, and pitch), it is so stable that just about anyone can fly it. It’s very durable and very capable of flying outdoors in light wind conditions. The model comes with a LiPo flight battery and a 1S USB-powered charger, extra blades, a 2GB microSD card, and a USB card reader/adaptor. The RTF version’s SLT TX460 transmitter comes with four AA batteries and has easy-to-adjust dual-rate flight modes so you can dial in the response and performance you like. By pressing the right control stick downward, you can switch between “low rate” for slow, easy flying or “high rate” for increased response. Also, the transmitter features a “flip” button for on-demand aerobatic fun and video and picture buttons to activate the digital extras.

When it comes to getting the RTF 1SQ V-Cam ready to fly, all you have to do is put the batteries in the transmitter and charge the flight battery with the included USB-powered 1S LiPo charger. The red charger LED will be lit solid while the battery is being charged and it will then begin to flash slowly when the charge is complete. Should the LED flash quickly, this indicates a charge error or a defective battery and you should not fly with it. Replace the battery with a new one. The included LEDs on the motor pods help with visual orientation and are very bright and easy to see.

To fly the model, slide the included LiPo battery into place and make sure it is fully seated against the frame stop. Turn on the transmitter, place the throttle stick (left) all the way down, and place the radio close to the model. Now with the model on a level surface, connect it to the battery power leads. Wait a few seconds and then test the link by advancing the throttle slightly so the rotors spin.

What’s not to love? The newest version of the 1SQ quadcopter with its included transmitter-activated micro digital video camera is a blast to fly. It is very stable and has enough power and performance to fly outdoors in calm conditions. With video on demand and built-in 3D flip capability, you’ll want to keep this quadcopter with you in the car so you can fly it as much as possible. Give it a try. You’ll love it.

The 1SQ V-Cam from Heli-Max flies great. It’s only slightly heavier than the non-video equipped 1SQ quadcopters, and the model has plenty of power to lift off quickly and settle into a stable hover. Indoors or outside, you can have a lot of fun shooting videos of your family and friends. When it comes to maneuvering, you can use high or low rates, whichever best suits your piloting skill level. The model is also very rugged in case you bump into something unexpectedly. Depending on the amount of maneuvering you do, the included 1S 250mAh LiPo battery will give you 8 to 10 minutes of flight duration. This is plenty of time to impress the in-laws if you buzz them while at the dinner table.

Aerobatics: Slow or fast pirouettes are very easy and going fast while flying with the video camera makes for an interesting panoramic view of your flying area. Side to side and fore/aft response is very good and you can really get a good head of steam built up while flying in a large area. Hit the flip switch and the quadcopter responds with a great side or forward flip depending on your stick input. Be sure to try this with plenty of altitude until you get the hang of it and with practice you can combine multiple flips.

When it comes to flight duration, keep an eye on the amount of power needed for hovering. As the battery becomes depleted, it will take more power to maintain altitude. You will know when it is time to land. Do not try to fly again or drain the battery more after you land. Recharge the battery or switch to a new pack. Be sure to let the motors and controller unit cool for about 10 minutes before flying again.

The video camera is underslung and the lens view angle is adjustable.

The “flip” and “picture” buttons are located on the back corners of the transmitter.

Depending on the amount of maneuvering you do, the included 1S 250mAh LiPo battery will give you 8 to 10 minutes of flight duration.

The bonus feature of this quadcopter is of course the built-in micro digital video camera. Included with the 1SQ V-Cam is a removable 2GB microSD card and a USB card reader. The card fits into a slot in the side of the camera case and it clicks into place. A neat feature is that the lens is adjustable up and down, so you can adjust the point of view. On the transmitter, there are two buttons on the back, one for video and one for still photos. You have to press the button for the mode you want and then press it again to start the video or take a photo. Pressing the button again stops the video. While in picture mode, the LED will flash momentarily as a photo is being taken. You can switch between the modes.

The quality of the video is very good and the camera makes a separate video file every time you click the button. To download your video footage, simply remove the SD card from the camera, put it into the USB reader, and plug it into your PC. The file folder will pop up and you can drag and drop your video files to your desktop and be ready to edit them. During our review, Windows Movie Maker was a great editing program.