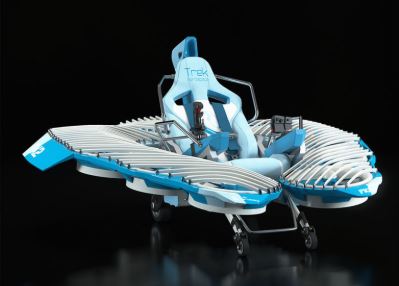 GoFly, a Boeing-sponsored competition, pushes the boundaries of innovation, engineering, and transportation to create a personal flying device for anyone, anywhere. GoFly just announced their five Phase II finalists, and they have some incredibly innovative ideas.

Here’s the scoop from GoFly:

Congratulations to all of our innovators and teams for completing Phase II of the GoFly challenge! We were incredibly impressed with the technical prowess and creativity of the entries—in fact, we received so many stellar high quality entries that we have added an extra prize, and will now be awarding 5 Phase II Teams with prizes. Each of these teams will receive $50,000 in prizes.

The GoFly community is comprised of more than 3,500 innovators from 101 countries across the globe. Of these innovators, 31 Phase II Teams across 16 countries submitted entries for review by a panel of experts across 2 rounds of rigorous judging. These Phase II teams were required to submit visual and written documentation detailing their personal flyer prototypes. It’s the first time physical prototypes were introduced into the challenge, and this crucial step has brought us ever closer to the Final Fly-Off.

Join us in congratulating our winning teams on their achievements and in thanking our partners and sponsors for their support of the GoFly Prize and our innovators. Major partners include Grand Sponsor Boeing, Corporate Sponsor Pratt & Whitney, and over twenty other major aviation and innovation organizations that offer resources to our competitors and participate in our Masters and Mentors program.

And now, without further ado, meet our Phase II winners (in alphabetical order): The Airboard 2.0 is a multicopter for human flight. The SI is a canard-wing configuration around a person in motorcycle-like orientation powered by two electric motors with ducted rotors. The aircraft makes a 90-degree transition from vertical take-off to horizontal cruise flight. The Aria is a high-TRL compact rotorcraft designed to minimize noise and maximize efficiency, safety, reliability, and flight experience. The FlyKart2 is an electric, single-seat, multi-rotor, ducted-fan, VTOL aircraft designed to be inexpensive to build, own, and operate.