It is embarrassing—bordering on painful—to learn an obvious lesson in front of your colleagues, especially when your colleagues are literally the best in the world at what they do. Nevertheless, that was the situation I managed to create for myself during a recent trip to Prescott, Arizona. This incident unfolded amid heady circumstances. I had recently been named adjunct faculty to the Embry-Riddle Aeronautical University (ERAU) Worldwide Campus Department of Flight. Along with other members of the team, I participated in a series of uncrewed aircraft system (UAS) training exercises and real-world testing this past October.

ERAU has two physical campuses, one in Daytona Beach, Florida, and the other in Prescott. However, we spent almost all of our time 20 miles north of the city at Gunsite Academy, an expansive civilian firearms training facility, encompassing 3,000 acres of arid scrub. Each day was punctuated by the distant sound of gunfire, as students from all over the country practiced their skills on the many ranges scattered across the property.

Although it lies beneath Class G airspace, flying over Gunsite required careful attention to the surrounding environment. In our immediate vicinity, the sectional chart noted extensive instrument flight rules (IFR) training at 10,000 feet and below. That meant that not only would there be a lot of airplanes flying around, but the student pilots would be wearing “hoods” designed to restrict their view to the instrument panel. So, each plane would have one less pair of eyeballs available to be watching for airspace conflicts.

To mitigate the risk, each UAS flight included at least one dedicated visual observer (VO), in addition to the required remote pilot in command (RPIC). Also, we had a hand-held aviation radio at our base camp, tuned to the control tower frequency for Prescott Regional Airport (PRC), surrounded by a protective ring of Class D airspace south of our location.

The student pilots used that frequency to call out their location and altitude, giving us some advanced warning when one was approaching our location. I quickly learned to identify ERAU’s own training aircraft—their white surfaces dazzling in the desert sun, with the tips of their wings painted dark blue.

Operating in the high desert was a reminder of another important aspect of flight safety: human factors. Although my fellow pilots and I never left the ground, flying took a toll on all of us, owing to the weather. It wasn’t especially warm, but the air was almost impossibly dry, making it easy to become dehydrated without noticing until secondary effects like fatigue and headaches began to register. Drinking water, and plenty of it, was an absolute requirement for safe flight operations.

Of course, safety is always the paramount virtue in aviation, but there was one additional factor that pushed it to the front of our minds during our visit to Gunsite. Several years earlier, a group of shooting range alumni were flying into the range on a private airplane for a class reunion. Making a low pass over the property prior to landing, they clipped a wing on a radio tower and crashed nearby. Tragically, all four people on board were killed.

GIVE IT A SHOT

One of the missions of the ERAU Department of Flight is to demonstrate practical applications for UAS technology, as well as the suitability of new platforms for particular missions. Among the projects we undertook at Gunsite was testing thermal imaging drones for their ability to detect and track an active shooter—that waking nightmare of modern American life wherein an armed individual enters a public space and fires on bystanders at random. 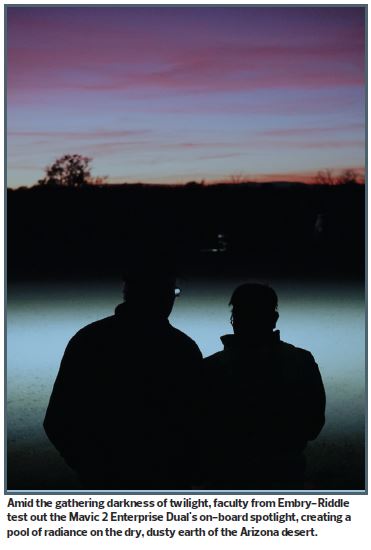 Active shooter response is among the most challenging scenarios that law enforcement must confront. It requires swift, decisive action while not further endangering the general public. Drones could be an enormous benefit in this type of incident, and that benefit could be extended to nighttime hours using thermal imaging technology.

Of particular interest to our research on this expedition was the FLIR Lepton sensor. A tiny, lightweight camera core, the Lepton makes it possible to add thermal imaging capabilities to everyday technology, such as smartphones. The Lepton is also the sensor installed on the Mavic 2 Enterprise Dual (M2ED) and the Parrot ANAFI Thermal.

For all of its advantages in terms of its physical specifications and low power consumption, the Lepton has one key drawback. It has extremely low resolution, delivering a 160×120 pixel image at 9Hz, which is to say, nine frames per second as opposed to the 24 to 30 frames per second we see in film and television. In short, it produces blurry, jerky video compared with what we are accustomed to by today’s standard. In spite of this drawback, we wondered if it could it still be enough to be useful in this real-world application.

To find out, we needed guns, drones, and darkness. Fortunately, we had all three available to us at Gunsite once the sun went down. The test would also serve a secondary function, allowing new members of the Department of Flight—like me—to demonstrate their night flying competence in order to qualify for operations under ERAU’s daylight waiver. What, I thought, could possibly go wrong? 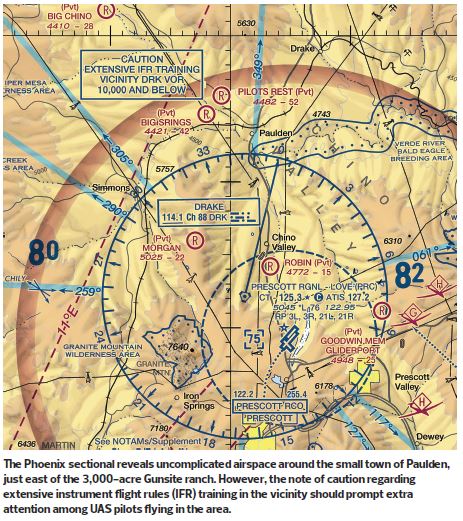 With the sun well below the horizon, the darkness that fell over Gunsite was nearly complete. Owing to the lack of nearby cities or even streetlights, the majesty of the night sky was on full display. For the first time in decades, I was able to plainly see the Milky Way, the disc of our home galaxy viewed edge on, stretching from horizon to horizon.

The location for our test was an outdoor shooting range, a flat, rectangular space with steel targets at one end, surrounded on three sides by earthen berms. A member of the ERAU faculty, who also works as a firearms instructor at Gunsite, took a shotgun, carbine, and several handguns downrange to play the role of an active shooter, while the rest of us hung back and set up launch and recovery pads using flashlights.

With a powerful strobe attached, visible for at least three statue miles, a M2ED orbited overhead. As our shooter blasted away at the targets, the strengths and limitations of the Lepton sensor began to reveal themselves. First of all, by registering the difference in temperature between objects in the environment, it was able to see, even in total darkness. However, the low-resolution image made it impossible to determine whether or not our colleague was carrying a carbine, a shovel, or anything at all. 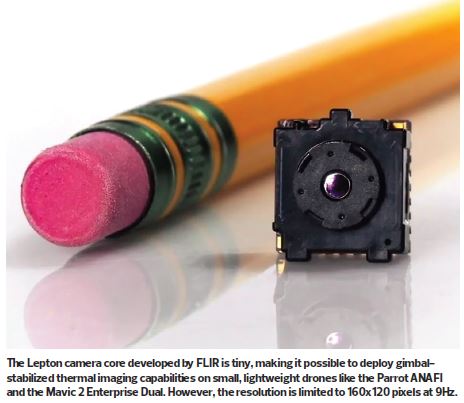 It wasn’t as useful as larger, more powerful—and much more expensive—thermal cameras I had worked with in the past, but I thought it could still be useful for law enforcement. They could use the thermal camera to search for a suspect, then, after locating the target, turn on the spotlight to confirm the suspect’s identity.

Also, our “shooter” provided one piece of additional interesting feedback. When standing within the spotlight’s beam, he was effectively unable to see out past its circle of radiance. Effectively, he was left night blind to anything more than 15 or 20 feet away, while his exact location and movements were obvious to all of us, watching from the outside.

This would only work in a dark, rural area where there is no outdoor lighting apart from that provided by the drone itself, but it seems like the kind of insight that might someday save a life. 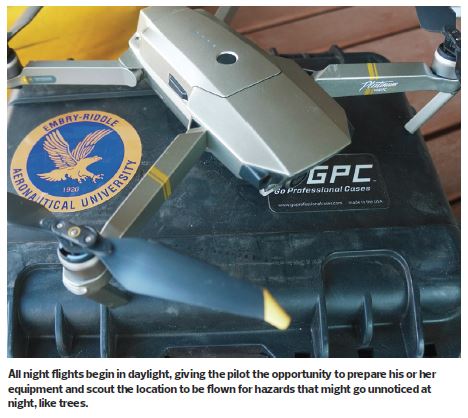 As I was already planning to submit a “Mission Profile” regarding my trip to Prescott, it occurred to me that I could use my own night qualification flight to enhance my reporting for RotorDrone Pro. Specifically, I thought I could take a long exposure image of our shooter uprange from his position, with his face and body lit by the muzzle flash of his own weapons.

Sounds awesome, right? I certainly thought so, but you will notice that no such image accompanies this report, which is your first hint that things did not go entirely according to plan. To prove my night flying competence, I attached a strobe to my own DJI Mavic Pro Platinum and sent it downrange.

Even after studying night flying procedures, as well as the physiology of the human eye and other factors, I found flying in total darkness extremely difficult. My previous night operations experience had been in urban environments, where it was still possible to discern something about the surrounding environment from the ambient light. 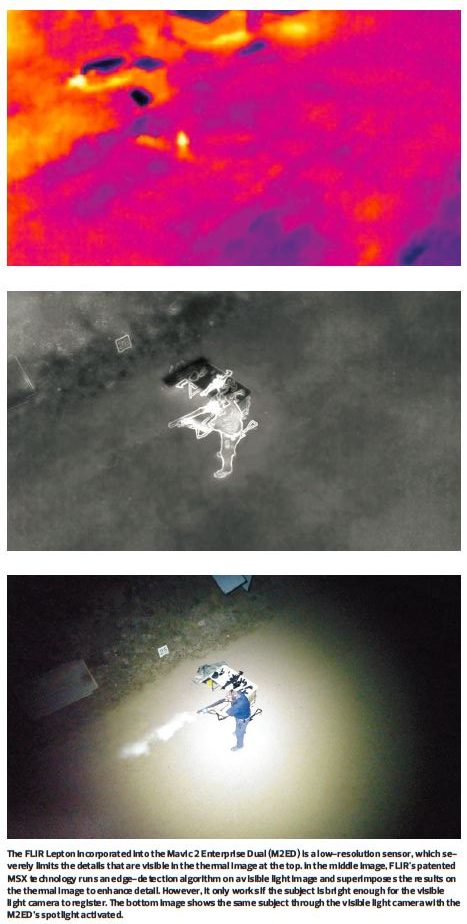 In the black desert night, I discovered, there is no such thing as depth perception—and therefore, no way to determine my aircraft’s position on the range relative to my subject, the shooter in our exercise. I might have been behind him, in front of him, or right beside him. Rolling the dice would yield just as accurate an estimate as my own senses.

Once I had managed to move past him with certainty and turn back toward him, I was unable to find him in the dark. The muzzle flash that accompanied each shot lasted only a split second: not enough time to fix his location in my drone’s field of view.

However, it turned out that failing to get a cool photograph was the least of my problems. When an errant flashlight beam swept across the berm at the end of the range, I saw something on my drone’s video feed that made my blood run cold: a tree branch, and then another—and another.

Through literally blind luck, I had managed to fly my drone into the middle of a stand of trees without hitting anything, so far. I quietly considered my options, well aware that my audience was a collection of the world’s best UAS experts and professionals, who had only lately invited me to join their ranks. A lot depended on what I did with my thumbs in the next 30 seconds.

Rather than asking for help, which would have been my best option and most aligned with the overall goal of safety, I decided to try to solve the problem by myself. For the record, this was not the correct choice. One option would have been that the M2ED could have been brought over with its spotlight to help me see my way clear, drastically reducing the risk of a collision and subsequent crash.

Instead, I silently reasoned that trees get smaller the higher you go, so a vertical ascent was my best hope of escaping unscathed. I gently pushed up on the left stick, expecting to hear the sickening buzz of a propeller grinding against a branch any second—but that dreadful sound never filled my ears and my machine climbed up, up, and away from the obstacles. Once again in open air, I quietly completed the required maneuvers to fly under ERAU’s nighttime operations waiver.

During the debriefing at the end of the evening, it quickly became clear that my silence had not benefited me in the slightest. No surprise. This band of world-renowned experts had detected my error and called me out for it, reminding me that an essential step before any night mission is to scout the location in daylight, in order to determine the location of hazards that might go undetected at night.

I admitted my mistakes, and was let off with a warning—and a chuckle. After all, I had put my own machine at risk, not one that was the property of the university. I breathed a heavy sigh, grateful that such a dire lesson had come at a relatively modest price, and was reminded once again that no one, regardless of how many flight hours they have logged or what they have done in the past, is invulnerable. Follow the procedures, do the homework, and ask for help when you need it. Those are the qualities that truly define a good pilot. —Text & Photos by Patrick Sherman