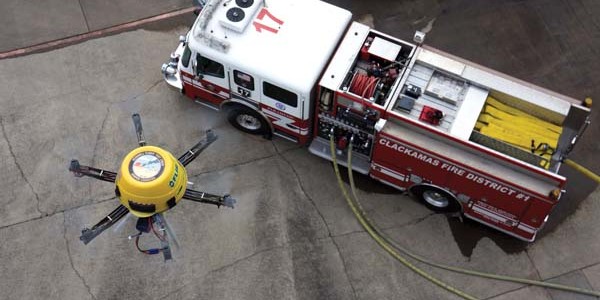 Multirotor drones and first-person view (FPV) technology are re-shaping the world by allowing hobbyists to make direct, real-world contributions to the safety and well-being of their communities. One of our top priorities as the Roswell Flight Test Crew is demonstrating the capabilities of this new technology to firefighters and other first responders. These brave men and women put their lives at risk to protect the rest of us from all sorts of deadly threats — and we believe that these multirotor systems can help keep them safe and even allow them to do their jobs more efficiently.

During one recent exercise, we confronted a frightening scenario: a terrorist intent to launch a mass casualty attack in an attempt to steal a large cylinder of chlorine gas from a remote water treatment facility. Their plans go awry, and they inadvertently cause a chlorine leak at the facility itself, requiring a combined response by firefighters and a law enforcement SWAT team. The site of this training was actually on an a real, working water treatment plant, and the scenario represents such a serious real-life threat that we were sworn to secrecy as to its location. All I can tell you is that there were trees — lots of trees. 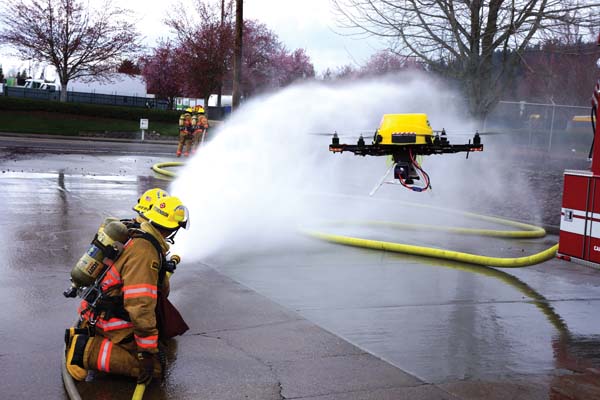 Above: A pair of crouching recruit firefighters practice using a 1 3/4-inch fire hose while RQCX-3 Raven keeps watch from behind

In this instance, our mission was to determine whether or not a multirotor drone aircraft — a role ably performed by our own RQCX-3 “Raven” hexacopter — could locate the source of the leak, as well as keep an eye out for any armed terrorists believed to be hiding in the vicinity.

Fortunately, we had our own secret weapon: a military-grade thermal imaging camera provided by FLIR (forward looking infrared). It sees radiated heat, instead of reflected light. It works equally well during the day and night, and is especially useful for identifying objects in the environment that are cooler, or warmer, than their surroundings — like chlorine gas escaping from a pressure vessel, or the body heat of an otherwise camouflaged terrorist.

Obviously, the scenario planners weren’t going to knock a hole in an actual chlorine cylinder for the sake of this training exercise, so to simulate a leak, they used an oil pan with a couple of inches of water and a block of dry ice.

At base camp, the firefighters and police officers who would be responding to the scene dressed in full hazardous material exposure suits, complete with a self-contained breathing apparatus (SCBA). As they rolled out to deal with the threat, Raven leaped into the air and scouted ahead. Wearing video goggles, we could take in the scene from the drone’s vantage point, high overhead.

The chlorine cylinder — about the size of a domestic water heater — was plain to see through the visible light camera, resting on its side where it toppled over while the terrorists were attempting to steal it. However, determining whether or not it was leaking would be the ultimate proof of the drone’s capability. 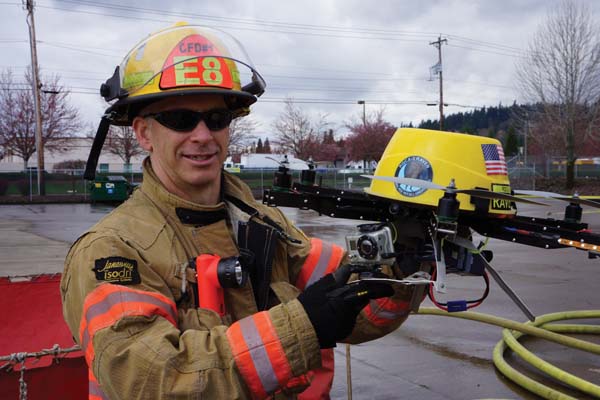 We switched over from the visible light camera to the thermal camera and could see a dark smudge at one end of the cylinder. The FLIR generates a black-and-white image, where black and darker shades of gray represent a cold object and white and lighter shades of gray represent a warm object — so that amorphous dark blur was, in fact, the dry ice that had been laid out to simulate the leak.

Of course, there weren’t really any terrorists lurking in the bushes, but there were observers gathered around to observe and assess the response team’s effectiveness, and their bodies, radiating 98.6 degrees of heat out into the cool morning air, were clearly visible through the FLIR.

Raven triumphantly returned to us after demonstrating how a drone can gather crucial information in an emergency faster than conventional means, and without putting lives at risk. 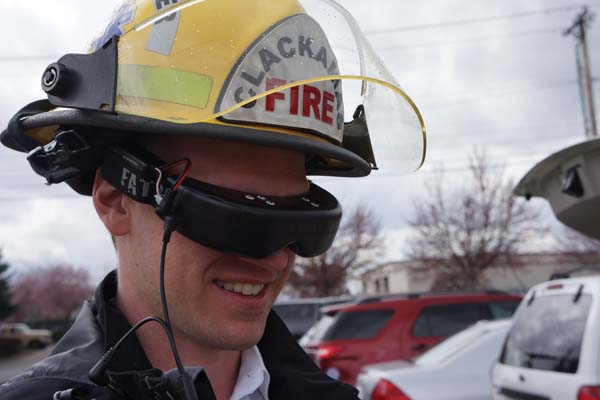 Above: Firefighter Brandon Paxton enjoys his first FPV flying experience, viewing the live video feed transmitted by RQCX-3  Raven  while she soars above the Clackamas Fire District #1 Training Center through a pair of Fat Shark Dominator video goggles.  Below: Using a FLIR Tau 2 640 thermal imaging camera, RQCX-3  Raven  monitors a structure fire during a training exercise conducted by the Eugene Fire Department in Eugene, OR. The black-and-white image generated by the FLIR reflects different temperatures within the camera’s field of view. The hottest areas within the frame are white, while the coldest are black — with different shades of gray represent temperatures between those two extremes.

We’ve had the opportunity to demonstrate other potential public safety applications, such as searching for a lost swimmer in a river, monitoring the roof of a burning building, and looking for hot-spots during a wild land firefighting exercise. Based on these experiences, and the positive reactions from the firefighters who have seen this technology in action, we have no doubt that these systems will one day be as much a part of firefighting as water hoses, ladders, and SCBA are today.

We also believe that hobbyists have a crucial role to play in showing the real potential of these systems. This is the start of a Golden Age for model aviation, where amateur ground-based pilots — like you — will help shape the future of this new technology and help transform the world in ways that we can’t even begin to imagine.

Below: Seen here alongside Clackamas Fire District #1 Engine 13, RQCX-3  Raven  is a custom-built FPV hexacopter capable of all-weather operations, thanks to the Rubbermaid bowl that serves as an enclosure for her sensitive electronic components. 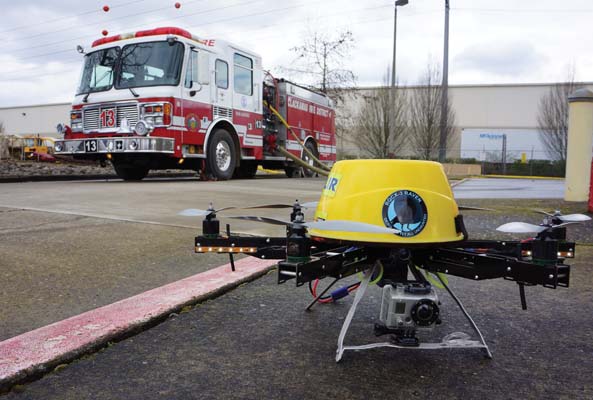 Text and photos by Patrick Sherman