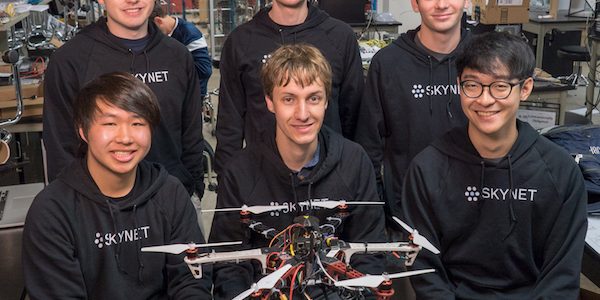 The team calls itself Skynet — yes, they’re aware of “The Terminator” — and spent weeks building and testing drones customized to carry sensors, and then writing the massive amount of code to run them. They are most proud of their APIs, or application programming interfaces, which will let users customize the drones to meet their own sensing requirements.

“The system is designed to be application-agnostic in the sense that you can use our APIs and libraries to build any kind of autonomous solution that you want,” said team member Kevin Lin. “Based on what we’ve seen at the Olympics and other presentational shows, you could totally use our software to build something like that.”

But Lin and teammates Andrew Brooks, R.J. Cunningham, Pharson Chalermkraivuth, Emilio Del Vecchio and Joshua Phipps, all electrical and computer engineering majors, developed the platform as more of a generic tool that can be programmed to carry out a wide range of sensing tasks on their own.The team spent the entire school year writing more than 10,000 lines of code and testing one drone and then multiple drones. Each drone is equipped with a Wi-Fi dongle that allows them to form a mesh network that enables communication across long distances without requiring a central access point. They’re also equipped to avoid obstacles and track altitude through onboard LIDAR (light detection and ranging) instruments. Each drone uses a Raspberry Pi as its central processor, and most can lift between 1 and 2 kilograms.“It’s easy for them to communicate in a peer-to-peer way, but all the underlying complexities of how the communication works are abstracted out to the programmer,” Lin said. “We provide really nice APIs to make it fairly painless for a client to get them to talk to each other.”

All those capabilities helped the team test several applications, including its primary goal of sensing signal strength from a stationary Wi-Fi hot spot in the middle of a Rice athletic field. “That was useful because it showcased two drones coordinating and sharing their data,” Lin said. “They just looped through the field and took measurements at all the points we programmed. We fed that into an algorithm that localized the hotspot.”

One of the most interesting experiments involved LIDAR, which uses a pulsed laser to locate surrounding objects. “We mounted a spinning LIDAR on one of the drones,” Brooks said. “That gives us a planar cross section of the environment.” Raising and lowering the drone – and thus, the horizontal plane – allowed them to capture slices of the immediate environment and build a 3-D map. During testing in the university’s engineering quad, a LIDAR-equipped drone detected and mapped walls, arches and even trees.

Sometimes, the team admitted, the drones crash. But the nature of kit-based drones is that the parts are easy to acquire and the fliers have become easier to repair as the team has gained experience.

“It’s a lot cheaper to take the individual components and put them together,” Lin said. “Our project is supposed to run on relatively cheap hardware, so our drones are mostly kits but with some modifications here and there.”

“Unless you plan to buy a whole new drone every time you crash one, it’s important to know how to take them apart and put them back together,” Brooks added.

Living in Houston over the past year inspired one application for future investigation, they said.

“Hurricane Harvey came shortly after we started working on this project, so there were thoughts of attaching gas sensors to our drones,” Del Vecchio said. “When some of the refineries started leaking gas, there were human health hazards. So our idea was people could possibly use these drones to measure the magnitude of a leak and determine where people shouldn’t be allowed to go.