The micro racing craze has taken the first-person-view (FPV) world by storm. These amazing little machines, as exem­plified by Blade’s Inductrix, turn your house into an FPV racecourse, and they’re so light that it’s practically impossible for them to damage anything. The only two issues with these addictive little quads are that they can venture outside only in calm weather and flight duration is rather short. With the new upsize Inductrix FPV +, Blade has addressed both these issues: The quad is fast and powerful enough for outdoor racing, and a 500mAh LiPo pushes flight duration up to six minutes. 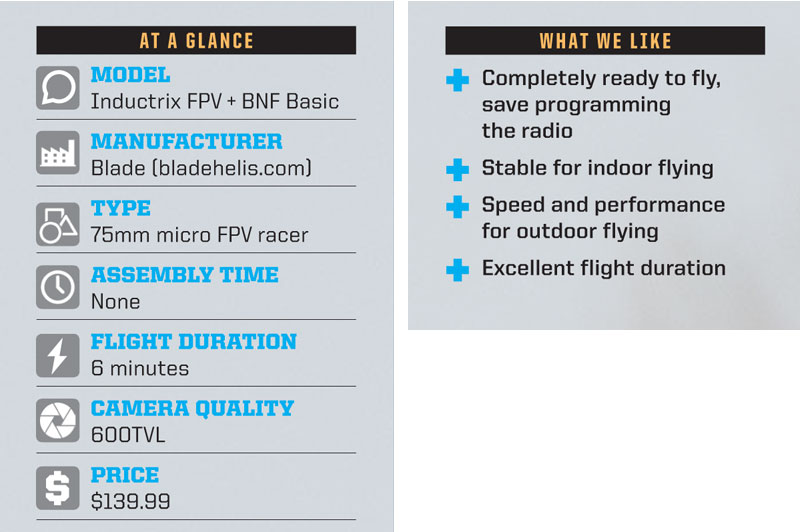 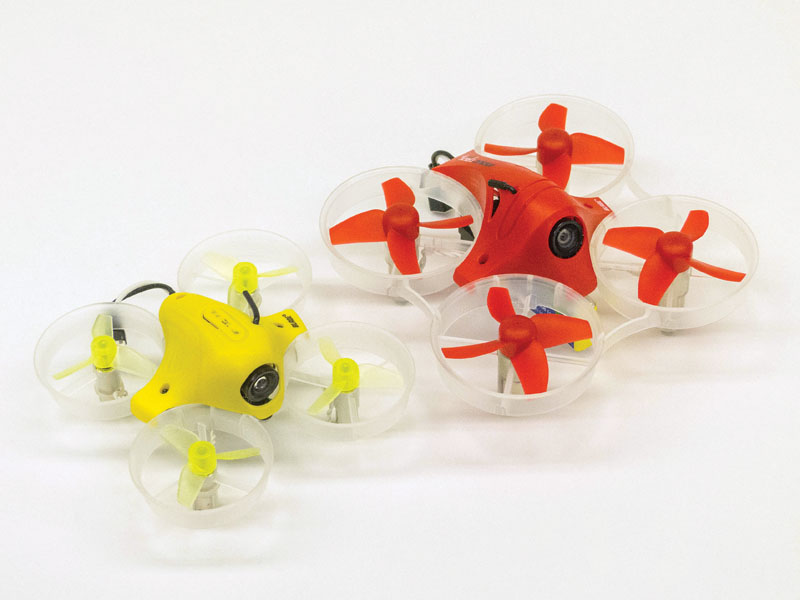 The Inductrix FPV + doesn’t look that much larger than the original Inductrix, but it weighs almost twice as much. The boost in power from the 8mm motors and 40mm props is dramatic, but both machines are enjoyable indoor fliers.

Highlights
The Inductrix FPV + takes the original formula and stretches it to a 75mm size (measured diagonally between motor shafts). Power is boosted by 8mm motors and 40mm props, and a 500mAh LiPo offers about twice the flight duration. The frame has added reinforcement for greater durability, and the camera is tilted slightly for a better viewing angle in high-speed flight. One other nice tweak is that the channel button has been moved from the top of the canopy to off-center, so you can no longer accidentally change channels by bumping the ceiling.

The Inductrix FPV + supports three flight modes: Altitude mode, in which bank angle is limited and the quad will hold altitude and self-level when the sticks are released; Stability mode, which limits bank angle and is self-leveling; and Agility mode, in which bank angle is not limited and the quad is capable of acro, such as flips and rolls. There’s also a handy “Meow” mode: If the quad lands inverted, you can double-click the bind button and two motors will give a quick burst of power to flip it upright. What a great idea! No more walk of shame!

The FPV + is available in both RTF and BNF versions, and programming is so quick that you can have your transmitter ready before the included USB charger has the LiPo charged. Extra batteries and spare props are inexpensive, and little else is ever likely to break. 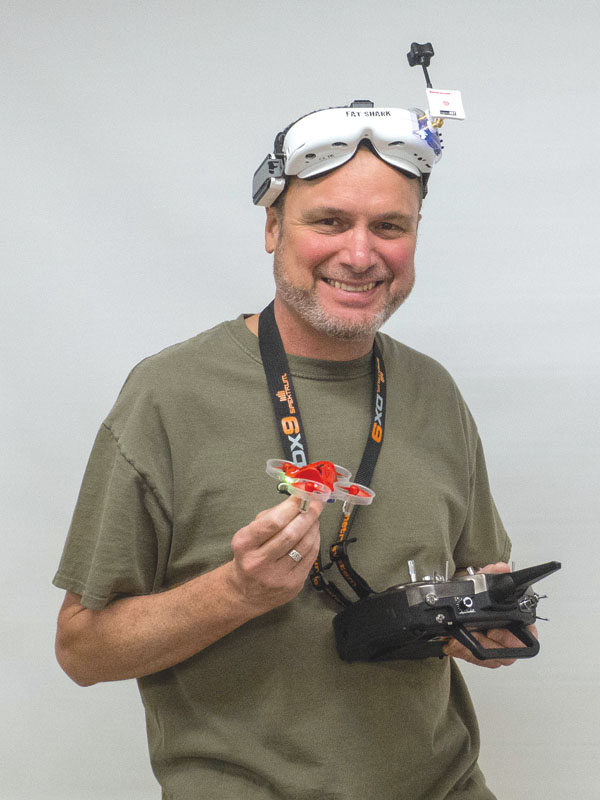 The FPV + is a load of fun, and my friends and I regularly meet at one of our houses for rat racing up and down the stairs. While high-quality goggles, like my Fat Shark Dominator HD3s, add to the experience, you can have a ton of fun with a low-cost receiver connected to the family TV.

Aerial Recap
It’s impossible not to compare the Inductrix FPV + with the smaller original Inductrix FPV. With its slightly heavier weight, the former perhaps isn’t quite as nimble and for-giving for flying in really tight spaces, but it compensates with greater power and speed and some interesting features. If you bump a wall, the FPV + will react with a quick burst of power to keep it from dropping. It’s fast and powerful enough for outdoor flying, even in a breeze. Best of all is the improved flight duration; whereas the smaller Inductrix is constrained by its tiny LiPo cell, the 500mAh cell of the FPV + can stretch duration to more than six minutes. Impressive! The 600TVL camera and 32 -channel 25mW transmitter provide good video quality and sufficient range for flying throughout the house and even out one door and back in another. 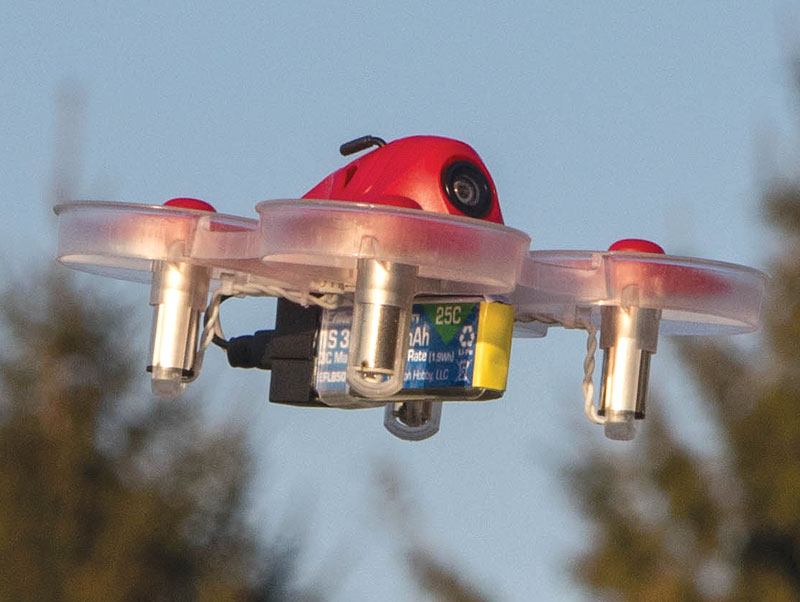 Altitude mode is intended for beginners; you can set the altitude by tweaking the throttle and then leave it set that way while you gain familiarity with the other controls. This works well if you leave the throttle alone, but if you make a power change while turning, it will abruptly change throttle trying to find the new altitude setting. In our flight testing, Stability mode offered the smoothest handling, and it’s docile enough even for low-time pilots.

In Stability mode, the FPV + tracks well in forward flight. Compared to its smaller sibling, it’s more controllable in steep descents, such as diving down stairways, and it has a lot more punch for rapid climbs.

In Agility mode, the FPV + can do basic acro, such as flips and rolls. With no self-leveling, you have to be able to fly your way out of these maneuvers, but you can click back to Stability if you get disoriented. The increased horsepower shows when you’re doing acro; it just has a lot more pop. In Agility mode, the top speed is much faster; it can really scoot.

Landing is easiest in Stability mode, but hey, it’s a
little quad—if you just reduce power, you can hardly go wrong. After landing, you need to click the bind button to kill the motors.

Bottom Line
With its increased size and power, the Inductrix FPV + is a big step up in capability over its smaller stablemate. It has the speed and performance to be a true indoor/outdoor FPV machine while r etaining docile handling for flying in the house. The greatly increased flight duration is a huge plus.