I had always envisioned that drone technology could be used in first res ponder situations, but for that to really happen, the technology had to mature a little more. In late 2014, at the brink of the release of the Phantom 3, I realized that now the time was right to put the ball in motion and start learning about the needs of first responders. My plan was to get a real understanding of how a firefighting or search-and-rescue team would utilize a drone and what their challenges were. Through that process, I planned to collect valuable feedback and, internally at DJI, discuss and create solutions to some of the problems we might come across. I quickly realized that our software development kit (SDK) would be a key element in providing a solution to a specific issue. 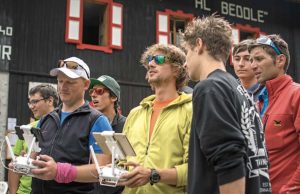 Romeo teaches some of the local young mountaineers how to safely operate a drone at the
Rifugio Adamello Collini al Bedole.

To collect helpful data, we decided to organize several training scenarios and observe the people who would be using drones in a real-life search-and-rescue operation. And some of these test scenarios allowed us to also get more insight into tactical executions. A big area of interest was to understand the needs of mountain search and rescue and mountaineering. We connected with Black Channel, an Irish team of experts in statistics, mathematics, data collection, social research, unmanned aircraft system (UAS) operations, and alpine rescue.

Mountain Search and Rescue on Adamello Glacier
The original initiative was launched in 2013 to help develop UAS to support the lifesaving mission of search-and-rescue operations. The Black Channel team applies state-of-the science research methodologies to make technology independent recommendations to improve the quality and safety of the mountaineering experience. Black Channel conducted a pilot study of drone-enabled search-and-rescue in 2014 in Fair Head, Northern Ireland, and Glendalough, Ireland. And in 2016, DJI and Black Channel conducted a set of field trials for drone search-and-rescue techniques on the Adamello Glacier in the Dolomites of Italy.

The objective of this project was to apply the scientific method to the evaluation of unmanned aircraft to medical missions. These missions can include search and rescue, emergency response, post-disaster needs assessment, medical-supply delivery, health research and data collection, and research and development of food and medical products. We wanted to apply the same rigorous standards used in the highly regulated pharmaceutical and medical research and development fields to assess the safety, ethics, and efficacy of drone-supported applications. 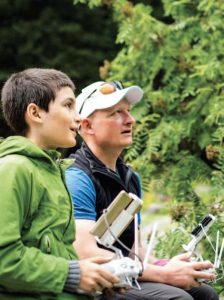 Would a drone change or influence the thinking of an experienced local mountaineer and search- and-rescue person before and during a search-and-rescue mission? At the same time, we also wanted to teach the next generation of mountaineers—and young minds—about new  technologies and get them thinking about future  applications. To make this all happen, we had to find a suitable location. And we did: the Adamello Glacier in northern Italy.
I arrived the weekend before we were scheduled to  make the grueling ascent to the glacier. I met with  the Black Channel team and the local mountain guides to finalize our plans. Together, we had to not only discuss the operation and the
testing environment but also actually do several practice hikes to get adjusted to the high altitude and the extra weight being carried and to strengthen our bodies for the real mission. Even though I was born and raised in the Swiss Alps, I did struggle the first couple of days. The weight of the backpack with all my equipment in it—from crampons (used to walk on ice), the harness, the ferrata kit, a helmet, personal gear, and the DJI Phantom 4 with extra batteries, chargers, radio, iPad, and spare parts—exceeded 40 pounds. It wasn’t ideal, but that was reality at the time. Carrying all that weight for eight to 10 hours going up the incredible steep mountains in the Dolomites was no easy task. And we also had to practice using the ferrata equipment, while facing 1,000-foot drops straight down below your feet; it meant we had to adjust mentally and get used to working as a team (and get over any lingering fear of heights). 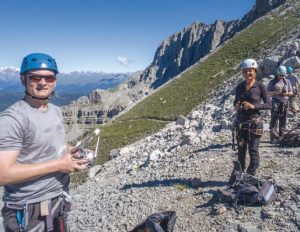 The first few flights at high altitude (about 2,500m or 8,200 feet) immediately showed that the Phantom 4 not only had enough power but also would be a very stable platform. The thinner air did make it much more responsive, and we adjusted the flying style. The dual GPS always allowed for the recording of the home location and provided the stability needed for a less experienced operator. The flight time did decrease in the high altitude, the cold, and the wind to between 19 and 21 minutes, with returning at 30 percent battery level. So that was not too bad at all. One can cover a lot of ground in 20 minutes.
We did a practice search-and-rescue mission up into the valley of Bocca Brenta, an incredible area flanked by high peaks and lots of thermal activities. The scenario was a lost hiker in an area that was filled with rocks. This was an area in which somebody could not only get lost but also hurt. That first practice flight provided me with good input and allowed me to continue to form my own hypothesis on how to tactically execute a search-and-rescue mission in this environment. That hypothesis would get confirmed a few days later on the Adamello Glacier.

Before our big adventure up to the glacier, we conducted a few stakeholder meetings in the valley below. It’s important to not only inform the local community about the plans and the purpose of a project but also get their buy-in, especially if you want to establish a more sustainable project in the area. Technology and knowledge transfer to the local community was part of our plan, and the goal was to use this area as a test bed for the technology owned, managed, and maintained by local stakeholders. One stakeholder in the area is the Tourism Office—an organization with not only a lot of influence but also a need for some of the data that a project like this can provide. We also met with the local Civil Protection directorate, which was interested in this project and the utilization of drone technology. Tourists often get lost or hurt in their mountains.

Ascent to the Glacier
The team woke up early to get ready for the hike and climb up to the Adamello Glacier. Everybody was very quiet that morning, focusing on the task ahead. We all had a lot of equipment to pack—from measuring equipment, to notebooks, laptops, and chargers—and I, of course, had to pack all the drone equipment, spare parts, chargers, iPads, and anything else I needed to make this venture successful. Packing everything smartly into a mountaineering backpack was key. We would be gone for four days and flying DJI drones—things had to be carefully planned and packed.

The Adamello-Presanella Glaciers are nestled in a natural landscape of unparalleled beauty. Historically, this area became the highest front during World War I. The Italy-Austria border ran at the time across two important mountain ranges, and between 1915 and 1918, the so-called “White War” was fought at more than 3,000m, or almost 10,000 feet, above sea level. The Adamello range was an important area for both armies; for the Italians, it meant controlling the area, which included Val di Genova and Trentino. The Austro-Hungarian troops looked at this mountain range as the pass to enter Milan. To this day, you can find artifacts from that war, from cannons, to machine-gun nests, to other war items left behind. It’s eerie to find all these items either in the rocks or on the glacier.

Left: During a practice hike, we used the via ferrata (“iron path”).

We met up with our mountain guides and our students early in the morning. It was time to say good-bye to our valley supporters, parents, and friends, and we quickly made our way closer to the glacier. We started our hike from the Rifugio Adamello Collini al Bedole. A “rifugio” is an alpinehut accommodation with shared mixed rooms intended to take in climbers and hikers who frequent the mountains. These rifugios are managed by the Italian Alpine Club and, by mandate, have to take in any hiker or climber for the night during operations.
Our destination was the Rifugio ai Caduti dell’Adamello at 3,040m above sea level. This incredible building is nestled into the side of the Lobbia Alta mountain and oversees the Adamello Glacier from approximately 150m above it. It can take in a little more than 100 hikers for the night and is a well visited rifugio and point for further excursions. 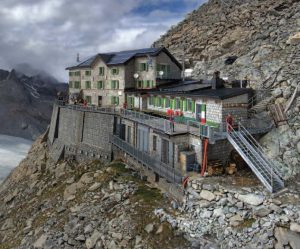 From Beldole, we started our ascent  along the river filled with glacier water. Our experienced mountain guides  decided to take the steeper ascent as we quickly needed to gain altitude because a thunderstorm was approaching.

The first hour was really nice, hiking  along the river, through the forest, and along the foot of the mountain. Then it was time to put our harnesses on and get ready for the more challenging part: up the via ferrata. One of the greatest thrills a hiker can have is to climb a via ferrata, or “iron path,” up a steep and dangerous mountain side. The via ferrata in the Dolomites is quite literally a route with fixed “protection” that aids the climber in moving more safely through the mountains. And now it was time for us to connect to the via ferrata, just as the sky above us started to turn darker.
Within minutes, we started to feel the first raindrops, and our guides kept us moving up the ferratas with no breaks. Out of nowhere, the sky opened up, and it rained cats and
dogs while we were climbing along the ferrata. There was a big thunderstorm above us. And being attached to metal lines started to worry not only our guides but also some of us as well. Lightning is a bad ingredient in all of this, and we had to get away from the ferratas as quickly as possible.

To read the rest of the story, be sure to check out part two.