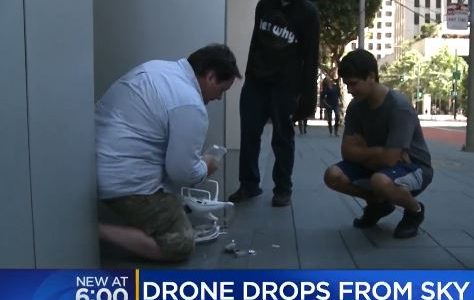 This frightening video shows a drone crashing to the sidewalk — narrowly missing pedestrians — during an aerial inspection of a cracked window at San Francisco’s tilting Millennium Tower.

Building managers were conducting the aerial survey of the structure while KPIX 5 cameras were rolling.

The Millennium Tower’s homeowners association hired a drone pilot to take photos of a cracked window.

The pilot says the drone lost satellite signal. At one point, the drone was no longer under his control. The drone drifted left and hit a building across from the sinking skyscraper.

The drone missed several people on the sidewalk and fell within 10 feet of a little boy.

Before it came crashing down the pilot flew the drone to the 36th floor to take video and photos of a cracked window. The broken glass was first noticed last week.

“We’re trying to evaluate whether the tilting has anything to do with it but we’re also looking at all other aspects of it, structural, whether it’s part of the window assembly, the manufacturing process, the installation process,” said HOA attorney Thomas Miller.

Since its completion in 2009, researchers say the 58-story Millennium Tower has sunk 16 inches. It has also tilted 2 inches to the northwest.

“If it was related to the tilting or sinking of the building, then you would likely see a pattern of other cracks perhaps in that same line of where this window is and I don’t know if this is just the first window to crack,” said Miller.

The homeowners association has taped up the window and put a wooden shelter down below on the sidewalk to protect the pedestrians.
They’re hoping the drone footage will help experts determine what’s causing this window to crack.

The pilot had to launch the drone from three different locations due to interference with his GPS and satellite signals. The Financial District is a difficult place to get a signal due to all the high-rise buildings.

He says he was able to get footage of the cracked window before it crashed. It was very fortunate nobody was hurt.

Next week, the HOA is going to have someone rappel down on the side of the building to remove the framing around the window so they can further inspect the cause.

They also plan to tape up that area so the glass doesn’t fall on the ground.