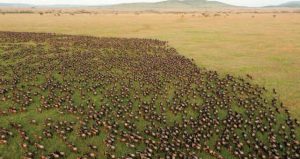 Advanced drones armed with double-barrel dart guns—that sounds like a scifi movie if ever I heard one. But it’s true—and not in a sinister way. In fact, such helpful drones could actually be coming to the United States very soon. The aptly named DartGun is the latest development from Haevic, a leading drone developer in South Africa. Haevic has reported than its robust platform has already proved to be extremely resilient and has successfully operated under daunting working conditions during agricultural operations in the Democratic Republic of the Congo. Based on the hexocopter super drone design, the Haevic DartGun (as the name implies) is equipped with an all-aluminum, lightweight pneumatic air-gun system and optical sensor.
Developed in tandem with one of the leading gun manufacturers in South Africa, the DartGun drone’s development was led by a team of professionals for use with the wild-game industry and for veterinarian services. Equipped with 17-inch propellers, the DartGun is able to lift a payload of up to 22 pounds while remaining remarkably nimble and a fast-flying performer, reaching a top air speed of 41mph and flying times of up to 40 minutes. The pilot can follow the target during flight by means of real-time FPV goggles.
Aligned with a built-in laser spotter, the pilot can view the target through the onboard HD camera during flight. Using the recommended air pressure, the DartGun has an accurate range of about 98 feet, and the goggles give the pilot the ability to control the dart gun with head movements. The gun tilts up and down on the gimbal according to the angle of the pilot’s head, and a crosshair on the screen aids in aiming the dart gun. Aiming the gun left and right is accomplished by rotating the DartGun about its vertical axis.
With a price tag of about $14,000, the DartGun drone provides a cost savings to game farmers, the game-capture industry, and veterinarians by eliminating the need for a full-size helicopter platform to accomplish the same tasks. Also, simply by flying over a farm’s herd, the drone, with its onboard camera, can be used to count and identify animals and their whereabouts within minutes. RFID (radio-frequency identification) tagging of livestock by the drone has also been accomplished to track game-animal movement.
For several years, the base model Super Drone, six-armed multirotor equipped with thermal cameras, has been used for spotting predators (or human trespassers) and for checking on the condition of farm animals. The DartGun variant, packing its 35mm, double-barrel pneumatic dart gun, comes equipped with foldable motor outriggers, a gun-stabilizing gimbal, a 16,000mAh battery and charger, a 10-channel transmitter, a GoPro HERO4 Silver camera, and the head-tracking FPV goggles.
—Gerry Yarrish