Within the next few years, millions of drones may be regularly flying over U.S. skies, and the National Aeronautics and Space Administration, better known as NASA, is working with the Federal Aviation Administration (FAA) and industry partners on developing a system for managing drone air traffic. We recently spoke with NASA’s Parimal Kopardekar, Ph.D., manager of the Safe Autonomous System Operations Project and principal investigator of Unmanned Aerial Systems (UAS) Traffic Management at NASA’s Ames Research Center in Silicon Valley. This NASA team has created a UAS Traffic Management (UTM) system, aimed at drones that are 55 pounds and under, that will allow increased efficiency, safety, and capacity in U.S. skies. 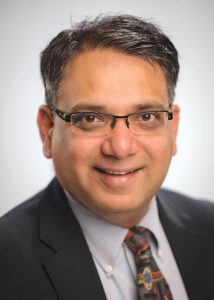 Parimal Kopardekar, Ph.D., manager of the Safe Autonomous System Operations Project and principal investigator of UAS Traffic Management at NASA’s Ames Research Center, is the recipient of numerous NASA awards including the Outstanding Leadership Medal and Engineer of the Year. He holds doctorate and master’s degrees in industrial engineering and a bachelor’s degree in production engineering.

RotorDrone: Can you tell us more about the NASA UTM and how it works?

Parimal Kopardekar: Sure. The first side of the piece is the FAA Flight Management System, [where] the FAA can put out any directives or constraints—for example, [where] there is a blocked-off airspace or anything that goes on that needs to be understood and followed by all airspace operators. The second piece is operator-to-operator interaction. Once you and I want to operate in the airspace, we know what airspace to avoid because the FAA says, “Avoid that.” Then we say, “OK, I want to plan my area of operation for search and rescue,” and you’re doing deliveries, so you’re going to have straight-line flight. We [both send our information to] the FAA system, and because we’re operating in the same airspace, the UTM allows us to interact with each other and share information about our other intent. If someone else is out there in a different location and our paths don’t crisscross, then we don’t have to worry about them. So once we do a discovery to see who is nearby, we connect with each other via a peer-to-peer exchange and you track your own vehicle, I track my vehicle, and if there is a situation where your vehicle goes beyond the planned area of operation and my vehicle is creating a problem for you, the UTM will automatically send an alert so [that] you will be careful, like defensive driving. The main idea of UTM is cooperating in an environment where you share and care about and stay away from each other. 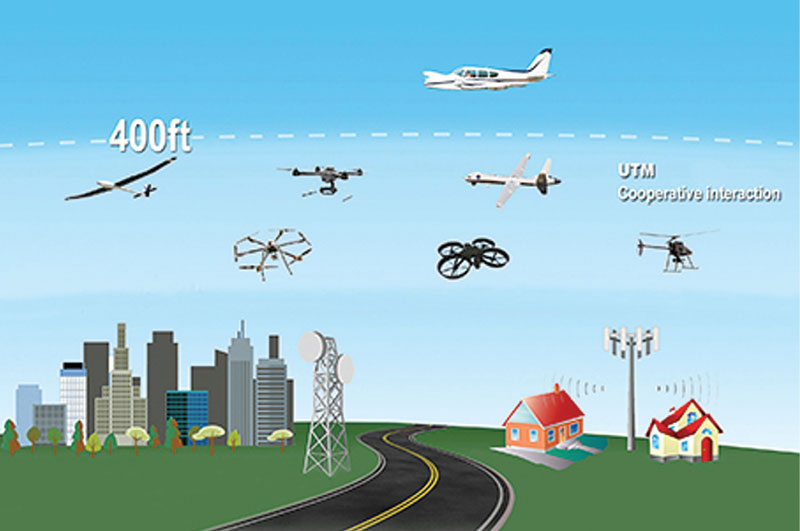 If an operator were planning to do an aerial video shoot, how would he or she tap into this system?

You can use your computer or digital device. The goal is that you’re connected, largely through the ground control station. So when the vehicle sends information to the ground control station, the station interacts through the UTM. The second way is that you may subscribe to a service through a UAS service supplier. So there is a three-way road of responsibility: the FAA, the UAS operator, and a USS [UAS Service Supplier]. So folks like Google and Amazon that have their own fleets will be operators as well as their own service suppliers. [Those] who may be operating a few vehicles may use a service supplier. There are a number of them emerging in the market: Skyward, AirMap, GE’s AiROS, and more. The idea is that with the USS, you will interact by sharing information. 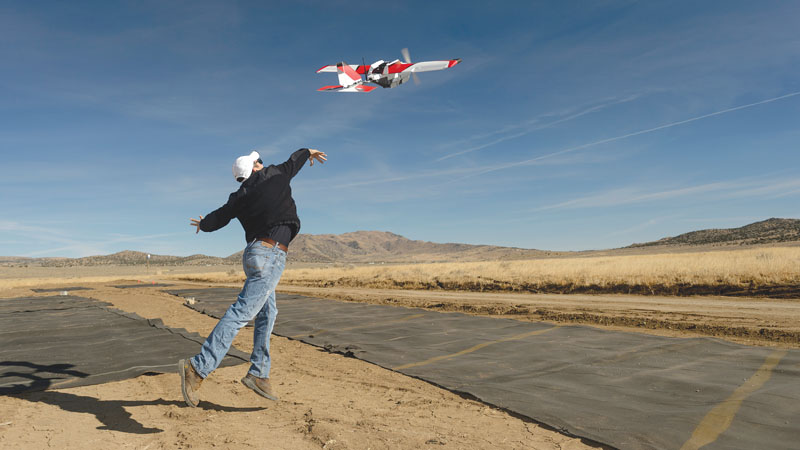 The fixed-wing PrecisionHawk Lancaster 5 being launched during the TCL2 demonstration at Reno-Stead Airport, October 2016. (Photo courtesy of NASA Ames/Dominic Hart) 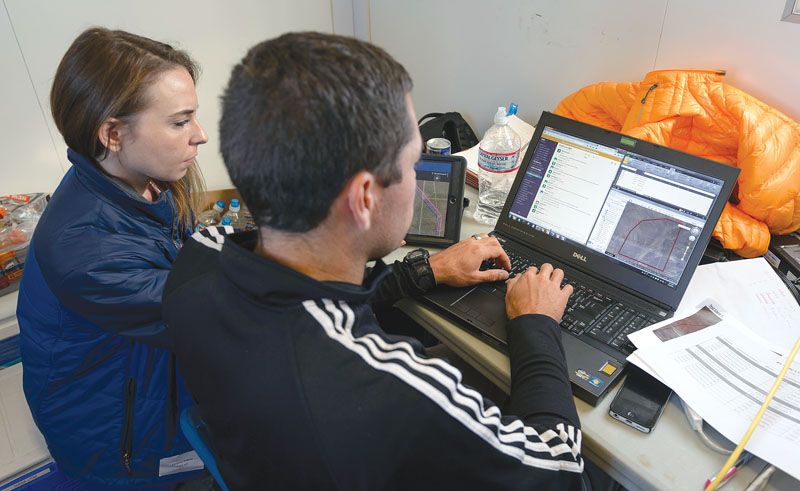 After your announcement earlier this year that you are working with Amazon, General Electric, Boeing, and Google, have you had a lot of feedback? Are other companies eager to join, or are they waiting to see how the program works out?

We have many collaborators—almost 200. Some of the collaborators are part of the concept and some are USS, some are doing data, [and] some of them are creating vehicles. All of them are part of the group I would characterize as USS. These are the people who are going to send in information about the flight plan or the areas of operation for someone else or themselves, and they will be interacting with each other to maintain the safety of all of our operations. As soon as you go beyond line of sight, you have to make sure you are where you said you were going to be. In conventional manned aviation, everything goes to the traffic control system by voice. Here, we have turned the model upside down. We tell you the constraints—what not to do—and then you can decide what is in the best interest of your business: whether you want to do straight line, search and rescue, whatever, as long as you don’t become a problem for anyone else. [With UTM,] you share where you’re operating, and you know where others are operating. 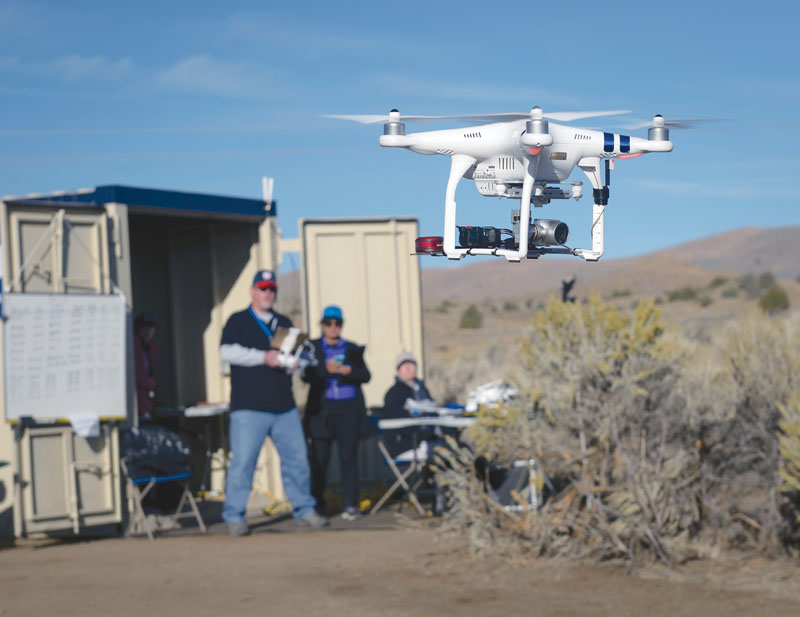 The Phantom 3 multicopter being flown at the TCL2 demonstration at Reno-Stead Airport, October 2016. (Photo courtesy of NASA Ames/Dominic Hart)

That’s impressive. When do you anticipate this system might be up and running and drones will be delivering packages?

With the UTM, we have full technical capability levels. Because of the complexity, we are going through a risk-based approach. The first capability level [we tested two years ago] was just focused on very remote areas where there are no other vehicles in the airspace, and we figured out how to interact with each other through electronic or digital means. Last year, we [tested] beyond line of sight capability with tracking options. The third capability that is being tested right now will figure out heterogeneous operations and vehicle interactions. The next tests center on [what happens when] you plan your airspace operations but then you get too close to each other because of uncertainties [like] wind. What do you do about it, and how do you use information about each other’s location and tactically stay away from each other? In 2019, we will be testing urban operations and what happens when there is no GPS, or you don’t have precise locations, or you can’t track yourself very well. Urban airspace has a lot of risks—buildings, trees, other vehicles, manned aviation—so you have to take all of that into account. What’s interesting about that is that we have a very good relationship with the FAA, and they are deploying things as we find maturity in our concepts. [For example,] FAA has taken our authentication authorization [concept] and built a “Low Altitude Authorization and Notification Capability” that they have already deployed. So the FAA is not waiting for all of the research to be done; as bits and pieces are available and mature, they are taking those things on and implementing them. 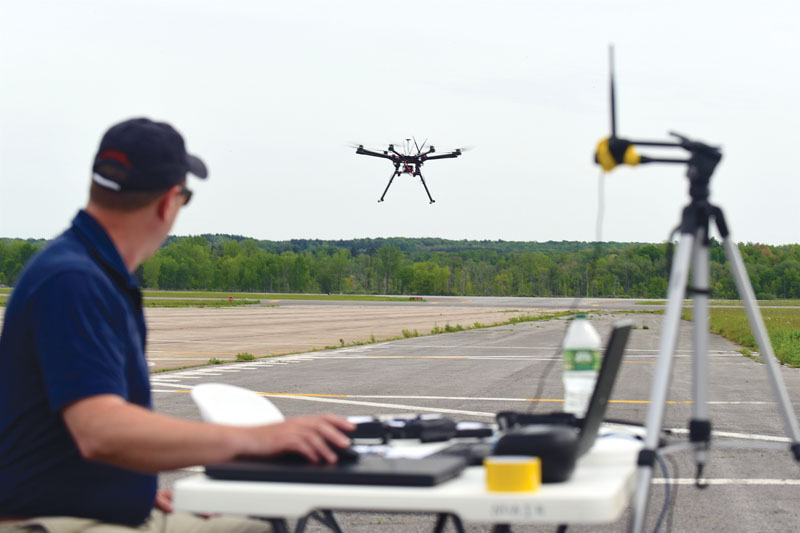 The focus of the UTM project is a series of field demonstrations that test technologies to safely guide multiple drones through multiple scenarios. (Photo courtesy of NUAIR Alliance/Eric Miller)

So it sounds like the future will be here before we know it!

The other day, a radio commentator asked me if the FAA was too slow, and my response to that was that the FAA is moving as fast as they can to ensure safe operations. We all want this to be as safe as possible, right? Nobody wants to see anything bad happen in the airspace. 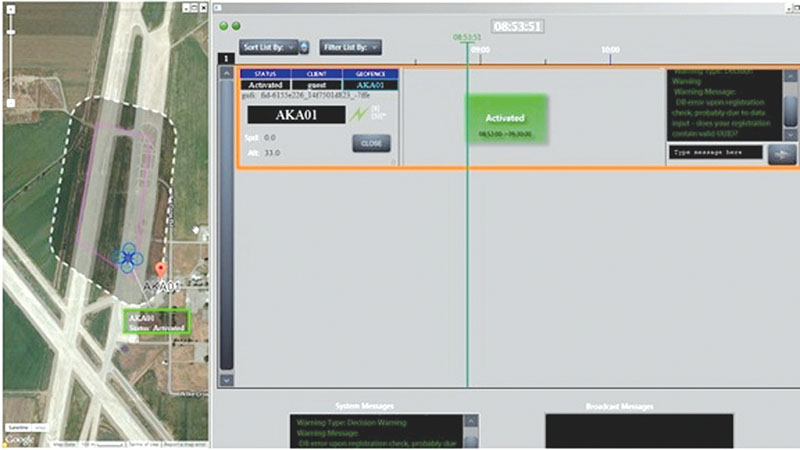 The UTM system scheduling and tracking displays. On the left is an aerial view of the operational area. The pink solid line indicates the flight plan that was requested from the UAS operator. The dotted line outlines the area where the drone is allowed to fly. This area is always larger than the requested flight plan to account for drone deviation due to wind or navigation uncertainty. On the right is a schedule view of the approved flight plan and upcoming operations in the UTM system. This view shows a single operation, but the system is capable of showing multiple simultaneous operations, each with its own start and end time, and general information about the flight, such as who is flying, altitude, and air speed. It also has an area where the UTM manager can message a UAS operator. (Photo courtesy of NASA Ames)

That all sounds impressive. You have a very exciting job.

Editor’s note: This interview has been edited and condensed.—Team RotorDrone