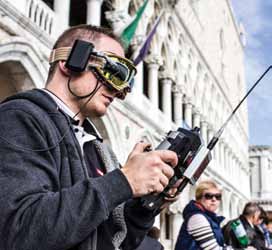 Back in 2003, first-person view (FPV) was little more than a half-baked idea in the mind of a young Swiss- Austrian student studying at the University of Zurich. But it was a potent mixture of “why not” attitude, plenty of spare time, and living in a scenic area that led Raphael Pirker, also known as “Trappy,” to help develop, demonstrate, and  popularize FPV.
“I was really bored at university so I had a lot of spare time,” Pirker explains. Preferring his foam-wing drone to his studies, he would head into the Swiss mountains and spend hours doing line-of-sight flying. Wanting to capture the stunning scenery around him, he added a camera to his flights, thinking, “How cool would it be to film that?” Line-of-sight can be limiting at the best of times—even more so when you have the entire Swiss Alps to explore. For Pirker, that drove him to the next evolution. “I’m very lazy, and the mountain always looks better on the top looking down than from the bottom looking up,”
he says. “It was always a dream of mine to get myself up there without actually having to go up there.” With a camera already onboard, the next step was to see what the camera could see. He realized, too, that solving that problem would pave the way to fly beyond lineof- sight. “That’s where it really started to click with us what this technology
could really do,” he says.

While no formal technology existed at the time to facilitate what Pirker had envisioned, he wasn’t the only one considering the problem. Christoph Dunkel and Remo Masina were also experimenting with FPV and quickly joined forces with Pirker to start Team BlackSheep, a drone footage and hobbyist store. Together, they discovered that everyday objects could be repurposed for their needs. “We were literally flying baby monitors and hacking up the electronics inside,” Pirker explains. “A baby monitor transmits maybe [as far as] a room or two,” he says, “but we turned that into something that can go 15, 20…even back in those days, we put up the world record of 89 kilometers,” he says, pleased with his early long-range FPV achievements.

Nowhere is off-limits to Team BlackSheep (TBS). Here, they
use a TBS Discovery quadcopter to fly around Venice, Italy,
showcasing the beauty of the city with unique perspectives
on iconic locations including the Rialto Bridge, St. Mark’s Square, and the Grand Canal.

In 2010, Pirker released a now-legendary video shot in New York in which he flew up and over the Statue of Liberty, Brooklyn Bridge, and the Manhattan skyline, quickly attracting wider attention to his exploits. “That video brought about an explosion of interest in FPV,” he says. “Overnight, we got about a thousand emails saying, ‘How can I buy this?’” Pirker, Dunkel, and Masina started building FPV aircraft to sell to  consumers, making rudimentary foam wings at first, then purpose-built FPV multirotors, all sold under the Team BlackSheep brand. “We’re called Team BlackSheep for a reason,” Pirker explains. “We’ve always had this kind of rebel image. We were called the ‘black sheep’ in the local RC community because we would always come in and break all of the rules,” he says, laughing. “All three owners have this really distinct idea that, in order to change the status quo, you have to challenge it. We try to build this [way of thinking] into our products.”

Pirker proved this stance when, in 2012, the cruise liner Costa Concordia ran aground off the coast of Isola del Giglio, Italy. “When the Concordia hit shore, the Italian government turned the area into a military zone, restricting journalists’ access,” he says. “So we flew from our hotel room. We had the curtains closed all around us, with just an antenna pointing at the ship. We wanted to make a point that there are no barriers; we don’t need access or permission,” he says—although, he admits, “we got into a bit of trouble there.”

“In fact, we got into trouble everywhere,” he says. From London to Singapore, authorities are never too happy with Team BlackSheep’s escapades. But the biggest case occurred in the United States, where Pirker was pitched against the Federal Aviation Administration (FAA), the department responsible for monitoring, licensing, and protecting airspace. “Flying over the Statue of Liberty in New York City put me on the radar of the FAA,” he says, although he didn’t get into trouble for that one. It was only after he was commissioned to shoot a marketing video for the University of Virginia that the real trouble began. By taking on a commercial job, Pirker fell afoul of the FAA’s rules. “At that time, the FAA had a rather ridiculous notion that as long as you don’t fly a drone for hire, it would be legal, but as soon as you flew it for hire, it became illegal.”

Unfortunately for Pirker, the job landed him a $10,000 fine. But he wasn’t ready to roll over at what he perceived to be ignorant bullying by the governmental agency. “They didn’t account for the fact that FPV was really picking up,” he says, and worried for the future of the hobby, Pirker decided to fight the case. “I just told them that I wasn’t going to pay their fine and that I was going to challenge them in court.” Unsure of where to head next, Pirker turned to Facebook for help, asking if any lawyers who were also into FPV wanted to help him make a stand. One did. Brendan Schulman, DJI’s vice president for policy and legal affairs, who at the time was working for the legal firm Kramer Levin Naftalis & Frankel LLP, came to Pirker’s defense.

Initially, the case was thrown out on the grounds that the FAA was only implementing a guideline, not a law. But the FAA appealed, shifting the definition of Pirker’s unmanned foam wing from a model aircraft to an actual aircraft. “This started a very, very weird discussion,” Pirker says. The legal arguments eventually came down to a question of recklessness: The FAA claimed that Pirker’s flight put people at risk—something he denied. “We continued down a slippery slope, ending up in a conflict of what actually was [considered] ‘reckless flight.’” Finally, after nearly four years of legal wrangling, Pirker had had enough. Pirker offered to settle for a $3,000 fee and the FAA agreed, reducing the settlement further to just $1,100.

“My legal battle was over, [and] I was pretty pleased about that. But it was not about me getting off the hook; it was about making them understand that this technology was not going to go away,” he says. “We are pleased that the case ignited an important international conversation about the civilian use of drones [and] the appropriate level of governmental regulation concerning this new technology; [it] even spurred regulators to
open new paths to the approval of certain commercial drone operations.”

Pirker helped start the FPV revolution and defended it from over-regulation and potentially dangerous legal precedents that could have shut down the entire hobby before it had even begun. “I’d like to think that we were fundamental in making FPV [what] it is now,” he says. Team BlackSheep continues to develop and sell FPV drone frames, and equipment has grown with the hobby. For Pirker, making FPV accessible to non-hobbyists and to electronics geeks, like himself, was a key aim.  He was one of the first manufacturers to introduce single PCB frames with wiring tracks, something fairly
standard today. His latest incarnation, the TBS Vendetta, has a frame made out of a single-piece carbon-fiber monocoque, which allows the electronics to slide in and
out easily. “It’s very easy to maintain but, at the same time, very stable and rigid.” 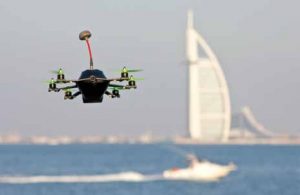 Despite strict laws restricting UAV flight in the  United Arab Emirates, Pirker and company still manage to get fascinating flights in. Here, Pirker pilots a TBS Gemini hexacopter near the Burj al Arab, one of the world’s most exclusive hotels, in Dubai.

Despite clearing his name and returning to the job of running a business, Pirker still retains an element of mischief—it’s, perhaps, the rebel inside him. On a recent trip to the United Arab Emirates (UAE), Pirker was detained by the local police. “I went to Abu Dhabi to meet a friend, and I’d barely stepped out of the car when a policeman noticed the quads on my backpack and started asking questions. I wasn’t even flying,” he says. However, despite the UAE’s strict laws governing unmanned aerial vehicle flight, Pirker had managed to sneak in some flights earlier in the trip, including a daring ride all the way to the top of the world’s tallest building: the Burj Khalifa. Once a black sheep, always a black sheep, it would seem.—Dave Stock